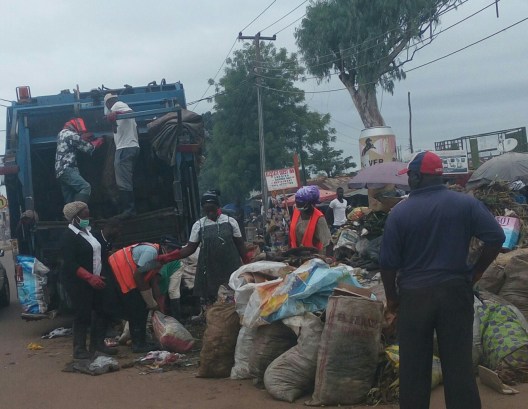 Shortly after the swearing in of Governor Nasir El-Rufai as 22nd Governor of Kaduna State in May 29, 2015, some policies of the previous administration began to suffer political setback as no attention was given to them, neither was there seemingly intention to continue with them. One of them was the issue of refuse management.

Due to the biting population of people and animals in the State, that development was so bad then that virtually everywhere within Kaduna metropolis was filled with hips of refuse with attendant consequences of outbreak of diseases. The situation was further complicated when those that were responsible for skeletal evacuation of refuse in the State went on strike as a result of non payment of their salaries for several months which eventually led to the termination of their contract by the governor.

However, about two months ago, the State government, through its Ministry of Environment and Natural Resources singed a Memorandum of Understanding with a key waste management company known as Zoom Lion Global Alliance (ZL Global Alliance), with Kaduna and Zaria metropolis as pilot phase. The good thing about the initiative is that the state government said its not setting up any special funds for the implementation of the programme.

Shortly after this, precisely on Wednesday 13th September, 2016, ZL Global Alliance in conjunction with ministry of Environment and Kaduna State Environmental Protection Authority launched what is now known as ‘Waste to Cash’ aiming at encouraging the people in the State to keep their waste properly.

It is but too true that the timing of the initiative was coincided with economy recession the country is currently faced with and with little financial reward attached to refuse in the state, residents, who are aware of the development now gradually becoming environmental Friendly and even protecting the scavengers from their personal and community generated waste.

For instance, hills of refuse that once litter major streets are fast disappearing as residents are busy packaging it in exchange for cash. The company said its paying N1:00 per kilogram and minimum of 25 kilograms is expected per lot.

Investigation by Gobroadsheet revealed that areas hitherto converted to refuse dumps are now clean as the refuse has disappear because of residents who are now protecting and packaging it for sale to the government.

Some of residents vox-popped by this Correspondent reacted differently based on their awareness, involvement and location.

26-year-old Mark Achus, who lives at Malali said that, he saw ‘Panteka built’ Pick-Up vans coming to clear the refuse and they taught it was the normal routine clearing, only to later discovered  that vans were taking the refuse to ZL dumping site where its being sold at a profitable price.

He regretted further that, they discovered the truth when the company came the following day and started asking residents to bring refuse, weighing them and paying them between N200 and N1000. He further said the company advice residents to keep their refuse, as they will come in three days to collect the refuse and pay on the spot.

Also, Tijanni Abdulsalam, a trader said though he is aware of the government idea to make the state clean, but many people at his Tudun Wada residential area have not been adequately informed to key into the programme as many of them still dump their refuse indiscriminately along the streets, urging the stakeholders to intensify campaign on radio, social networks to reach as many people as possible for huge success.

In his own view, Inusa Mohammad, doubted the genuiness of the initiative, opining that the package is too beautiful to be real, “as many of us have took our mind off government driven projects because of previous experiences we have had. I’m not really saying it will not work but concerned about sustainability. Experience have shown that when they start well like this before you know it, they deviate and beginning to fumble.

“If you ask me, I will tell you that I love my state more than anybody else and I will always seek good thing for it. If the government is serious with this programme they have just started, I promise to take it as mine. But if it turn out to be another lie, well I will not be disappointed because I’m prepared. I wish them success anyway”, he added.

At the popular Ungwan Rimi junction, Kaduna, this Correspondent met with a van collecting refuse with five crew members on board one of whom was paying people, some people who looked excited claimed they have made up to N2,500 from refuse sold to the company. Some of them were seen running into the communities to collect refuse from residents who are not aware of the development.

Leader of the crew, Ahmed Tijjani said, his company is buying refuse to recycle it to organic fertilizer and other useful household products for the benefit of the society. Ahmed further said Kaduna State government saw the ability in the company through its foreign partners to embark on the project, quickly added that, “as I’m speaking with you, huge refuse has been collected and dump at our newly established transfer stations and dumping sites and the recycling will commence soonest”

Commenting, Commissioner, Ministry of Environment and Natural Resources in the State, Shehu Balarabe Giwa reiterated the commitment of the State government to make the state cleaner as first to watch in Northern Nigeria, saying the initiative is not costing the state government anything apart from already allocated budgetary plan for the ministry.

According to him, “when the company first approach us some months ago, we didn’t give immediate response but we met with environmental experts and governor discovered that since the initiative is to give our people a better and safer environment especially this raining season and no special funds was required, we thought of given it a trial and we eventually signed MoU to that effect. We never knew people will be happy about it. It is all in attempt to make the state safer security and environmental wise.

“But I must add that we may experience tooting challenge at the beginning which I’m sure we will overcome because no challenge is permanent and more people including critics will appreciate this administration better. Our Governor has did it before so let people belief in his policies because they are in their best interest. We will give the ZL Global Alliance all the necessary support they needed to make them succeed.

“Already, the State government has already contracted construction of standard transfer stations and dumping sites in the three senatorial districts though this waste to cash initiative started with Kaduna and Zaria as pilot phase, but it will be extended to Kafanchan and other towns across the state as we assess the progress we are making”, he said.

However, Managing Director and Chief Executive Officer, ZL Global Alliance, Abiola Bashorun said, “we have done it in Ghana and it was a success story. We see the seriousness in the State Governor to transform the state and we noted that we could be part of that success story. As an international reputable organization, we are abiding by best practices obtainable elsewhere in the cause of our duty and in tandem with International practice.

“For now, we are doing everything we can to sensitize the people resident in the State. We have produced jingles for electronic media in the State to tell people about our presence and the purpose of that presence. We just hope they will see the need to do things better than the way things are done before now. We want our brothers and sisters including the much talked about ‘Amajiris’ to key into the programme. We have trained and still training people that are directly involved on how to manage their health before, during and after each encounter.

“Our ZL Global Alliance trains will be going round on a daily basis within Kaduna and Zaria that happened to be our pilot towns to collect the refuse. I want to plead with people to please help us serve them better. Their responsibility is to keep their dirt in sacks or polythene and drop it at designated spots in order to make if easy for our men to load.

“ZL Global Alliance is investing good money into this initiative in Kaduna state. The State will benefit more when we beginning to recycling the refuse and export the bye product to where they will be needed to further produce household goods. For example, whatever the state is able to recycle, buyers will come around to buy and will definitely pay tax which will go into the state government’s purse by a way of IGR.