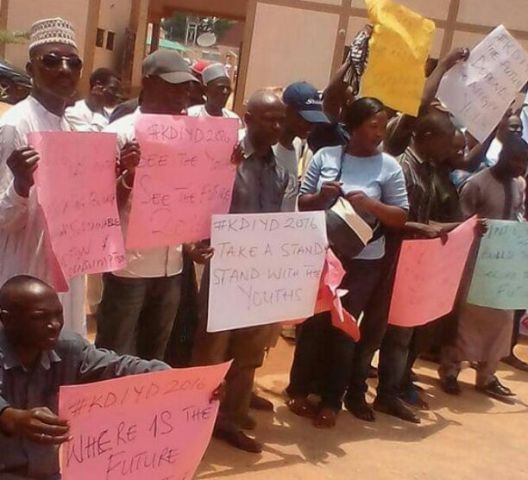 They noted that, the governors have been meeting, issuing press releases and communiqué without any political map that can holistically address the already identified challenges like moribund companies, insecurity, unemployment, almajiri and education among others.

Addressing newsmen shortly before the botched peacedul protest in Kaduna by Nigerian Police Force, National President, NYCN, Comrade Isah Abubakar warned that, if the governors from northern Nigeria refused to wake up from their economic and political siester to address issues, the region will continue lagging behind and mar with pocket of social unrests.

He said for instance, there can’t be an end to insecurity in the north as long millions of almajiri children still roam the street quickly added that, they were out to protest activities of their governors because as youths, they were not feelng the impacts of the perennial meetings where tax payers monies are been squandered.

On security, Abubakar said; “If the Forum is really ready to solve insecurity issue, it is not in conducting several meetings, but to take action. The crisis in Southern Kaduna is an internal problem between Fulani herdsmen and people of that particular area.

“We are here this morning to protest activities of NSGF because as youth organizations, leaders and activists, we feel these governors have not lived up to their expectations. There has been this kind of meetings severally, but no impact especially in securing lives and property of citizens.

“There is no going to be an end to insecurity in the north as long as almajeri child roams the street.  There is a need for the governors to holistically look at the almajeri system of education and device a means of impacting Islamic knowledge on the young ones.

“Children should not be allowed taken from Maiduguri to Kaduna and so on without parental guidance.  If this practice persists, you think you can curtail insecurity in this country? We are deceiving ourselves. The Forum needs to engage the people of southern Kaduna  as well as the Fulani herdsmen in dialogue to see how they can bring a lasting solution in that area.

“People making reckless statements over the issue in southern Kaduna should please put a stop to it.  Nigeria or Kaduna state is not a lawless country. We have laws so people should not take up arms to protect themselves, rather find means of dialoguing between one another so that we can find a lasting solution to the problem.

On the socio-economic, Comrade Abubakar added, “Investors are not interested investing in the north due to insecurity. Youth of the region are jobless, there are lots of misconduct amongst them. Yet these governors keep telling them stories that there is going to be light at the end of the tunnel from their activities.

“These same governors travel out on exotic SUV Jeeps, while numbers of tractors are less on our farms. No fertilizers for local farmers to use. Foods in the region now are very expensive, this is totally unacceptable. People can’t afford to buy kerosene, firewood is not accessible, gas is not available.

In his on view, Vice President of NYC, Comr Abdulsalam Muhammed Kazeem harped on improved power supply by considering alternative power generation in the north which is endowed with wind and solar sources that can be tapped to revive moribund industries thereby improving employment and economic goals.

“Youth form a large chunk of population and are easy tools for manipulation by political class and elites to destabilize the polity. As such employment opportunities must be created and entrepreneurship encouraged”, he added.