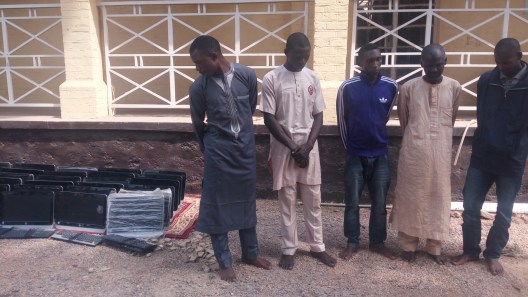 (Suspects been paraded at SIB Kaduna on Wednesday)

The prime suspect, Aminu, denied the allegation of having custody of alleged missing 55 unit of computer set, saying he only went home with one sometime in February 2016 to work with. Unofficial sources said each computer set cost N320,000.

When asked whether he is a computer engineer or repairer he told Daily Sun that, he took it home to enable him further do his unfinished official assignment of students registration.

“I am a civil servant with KASU, working as librarian at e-section. I don’t have 55 computer set in my house. I only went home with just a computer to complete my work. But some thieves broke into my office and stole 14 of them. I’m only here to answer only one that was recovered from my house”, he said.

Also narrating his involvement in the allegation, Stephen said, Adamu had approached him whether he was interested in buying a fairly used deskop computer but he declined because he preffeted laptop.

“I later helped him found a buyer. Then after, we have sold about 24 at the rate of N22, 000 per one. I never knew they were from my school because there was no any other identification tag on any of them. I did it on my ignorance”, he stated.

Commenting, Acting Chief Security Officer of the school, Nasir Ishyaku said the school invited the police when the issue was raid, saying internal investigation has been launched to track any security personnel involved and hand such over to the police.

He queried whether it is possible or legitimate for any staff to go home with property of public institution like KASU without any official letter to such effect.

Spokesman of Police in Kaduna, ASP Aliyu Usman said, “on the 21st of December 2016 at about 1400Hrs, the acting Registrar Kaduna State University reported to the commissioner of police that, on the 20th of December, 2016 at about 0200Hrs twenty (20) pieces of all-in-one HP Desktop Computers were stolen at the university computer center.

“Previously about 35 of the computers were stolen at e-library of the school making a total number of fifty five (55) computers estimated at seventeen million six hundred thousand Naira (N17,600,000).

“In the course of investigation, operatives of the State Intelligence  Bureau (SIB) Kaduna apprehended one Aminu Shuaibu a Staff of the university with one of the computers. Arrest was also made of one Dauda Mohammed Umar (Security Man on duty during the incident) and Stephen Timon (student of the university) who criminally conspired with one Nosa and three others to perpetrate the crime.

“Also one Dennis Monday a student of the University (KASU) and one Kamal Aminu were arrested and thirty two (32) of the stolen computers sold to them were recovered”, ASP Aliyu said.