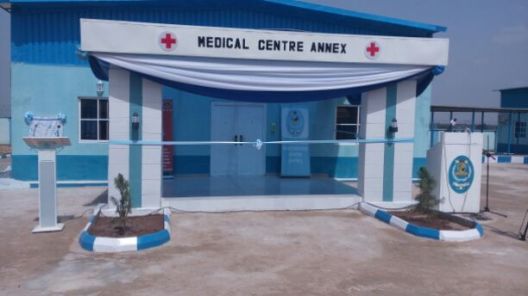 Sokoto Governor Aminu Waziri Tambuwal has donated an office apartment that will serve as field office for the United Nations International Children’s Fund (UNICEF) in Sokoto, Zamfara and Kebbi states.

The building, officially opened by the governor on Saturday, is located at an exclusive area in Sokoto town and will house various departments of the global agency.

Before the opening of the new office apartment, the Sokoto Government and the UNICEF signed a Memorandum of Understanding (MoU) on child education, health and malnutrition in the state.

The agreement was signed by Tambuwal and UNICEF’s Country Representative in Nigeria, Ms Jean Gough.

Speaking at the ceremony, Tambuwal said his administration takes the issue of child education seriously.

“We have so far met our target for school enrollment for 2016. So signing of this agreement is one event we have been waiting for as it will ensure the improvement of the lives of children in various sectors of development.

“We look forward to collaborate with any organization across the globe in making the state achieve all necessary needs across all sectors,’ he added.’

He appealed for more support from the UN agency and said that the state government was committed to ensuring successful implementations of all agreements.

The governor assured that the government would remain committed to the course of children’s welfare in spite of the myriad of challenges confronting it.

Earlier, Gough had called on the state government to initiate free- feeding programme in primary schools across the state.

She said that the gesture would serve as support to parents and encourage most children at the grassroots to go to school as well and reduce malnutrition among children.

“We will support Sokoto state in the area of education by allocating more resources to achieve the desired goals on the state-of-emergency in the sector,” she also said.

According to her, UNICEF is always ready to support the government, and it is committed to protecting the lives and rights of children.

Gough said that the fund would help in meeting basic needs of the children and to expand their opportunities to attain full potential.