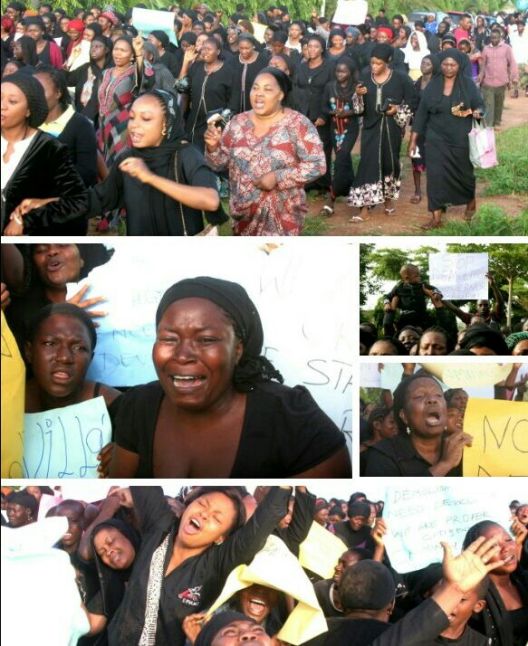 (Women and children protesting against propose demolition of their houses at Gbagyi Villa,  Kaduna by Kaduna state government few months ago)

Worried by the incessant killings in villages of Southern Kaduna, a Member of the House of Representatives, Barr. Sunday Mashall Katung has called on President Muhammadu Buhari to declare state of emergency in the area to end the unrest.

This was also as the Senator Representing Southern Kaduna Zone, Danjuma La’ah described the last weekend killings in Godogodo as an unforgivable crime, saying perpetrators must not be allowed to go scot-free.

The member who represents Zangon Kataf/Jaba Federal constituency, also wants the Federal Government to establish a military formation in Jema’a local government with the aim of stopping the invasion of terrorists into the helpless communities.

The Representative in a statement made available to newsmen in Kaduna on Tuesday asked the President to invoking the constitutional provision in Section 14(2)(b), which states that “the security and welfare of the people shall be the primary purpose of government”.

Katung warned that if the Federal government fails to act, the people will be left with no option than to resort to self- help which will further exacerbate an already inflamed situation.

According to him, “Southern Kaduna people will no longer tolerate this deliberate plans to annihilate its defenceless people with both the federal and State governments doing next to nothing.

“Enough of these killings. Our communities have concurrently been attacked aggressively claiming innocent lives mostly women and children, crops worth millions of naira have been destroyed by herdsmen and a number of houses have been burnt down. This scorched -earth policy must be brought to an end with immediate effect and we demand that all those found culpable be arraigned before the courts in the spirit of justice and equity. A situation where innocent citizens are attacked, maimed, killed and their properties taken over with security agents watching without genuine intervention gives cause for concern.

“Ultimately Surviving Victims are left to fend for themselves without any form of support from the Government. As it is, they lack basic necessities to ameliorate their suffering and many more are living under harrowing conditions arising from previous attacks.

“What is worrisome here is that these killings have continued unabatedly for almost five months with no commitment from either the State or the Federal governments to stop these unwarranted and provocking attacks.

“The government should not take the patience of our people to mean cowardice. And the failure of the government to stop these killings will mean an endorsment of evil on the defenseless people,” he said.

Finally, both the state and Federal Govt ought to upgrade their intelligence gathering mechanism to forestall the occurrence of these incessant attacks,” Katung stated.

Sen. La’ah in a statement said no group of persons must be allowed to escape with the impunity.

Part of the statement reads, “I heard what was happening since last Saturday evening, but I was stopped from rushing down here. I want to say that what I have seen here is huge crime. It is an unforgivable crime against the people of Godogodo, Southern Kaduna and humanity. No group of persons must be allowed to escape with this impunity. My heart bleeds for you and I shall take up upon myself to ensure that the relevant Senate Committee do the needed to bring peace, succor and justice to the people of Godogodo.

“My investigation shows that there were very few soldiers and police here compared to the size of the town and the danger looming over it. I’m told that the invaders had far supprerior weapons. Again, some of the soldiers have been here for months without allowances and basic welfare. There is no way they can be at their best in these situations.

“I am surprise and sad to hear this, because Kaduna State Government has claimed that it is spending N200 million paying Soldiers, Police, SSS and the rest monthly. Why is it not showing in Southern Kaduna? He queried.

He however appealed to the people of the affected communities to henceforth defend their lives and property against such attacks, but should not take law into their hands.

“I appeal to you my people, to keep your peaceful nature and not take the law into your hands. But you also have a responsibility to defend your lives and your property next time they come,” Sen. La’ah said.