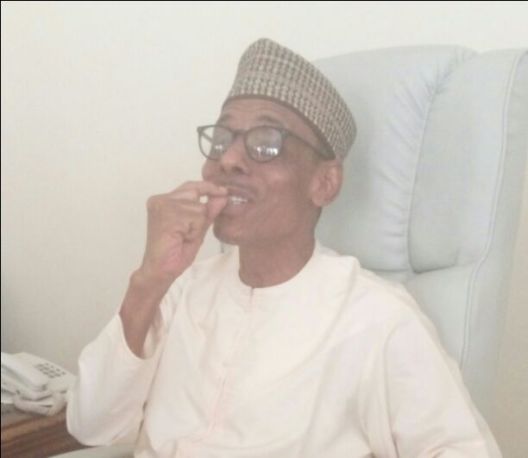 //Politics: Godwin Ekosin, Kaduna//
A Stalwart of All Progressive Congress (APC) in Northern Nigeria and Northern Elders Forum Chieftain, Dr. Hakeem Baba-Ahmed on Monday called on President Muhammadu Buhari not to see those who told him the truth about current economy hardship in the country as enemies but as partners in progress.

This was as he cautioned governors from the region to be in the frontline of the search for credible policies and reduce frequent traveling around the world, saying such monies they spent could be channelled towards payment of accumulating salaries and other immediate needs of their people.

He said it will be President Buhari’s lot to assemble the Nigerians to advise him and take forward his vision and will need people who will convey his concerns and compassion; who will reach and bring comfort to millions who suffer in an economy under recession; and people who will combine his personal integrity with competence and commitment.

The former Federal Permanent Secretary stated this in Kaduna yesterday while delivering a keynote address at the opening of a two-day Annual Pan-Northern Group’s Summit on Security, Socio-Econonic and Political development of the region added that, the nation is not wrong when it insists that President Buhari’s image and vision are not being served by the quality and competence of many of the people he has assembled to work with him and see the nation through the current difficult period facing it.

“Those who insist that President Buhari’s administration can do much better in managing the recession, in the all-important fight against corruption within the laws of the land, and in rebuilding a nation united around the values of justice and honest enterprise are not his enemies.

“Most of them are people who voted for him because they shared his belief that we can live secure lives; that leaders do not have to steal our resources and that our children can live in, and work in a nation they can be proud of”, he said.

According to him, northerners bear the brunt of bad or poor governance more than other Nigerians with a solid experience of living under leaders who were inept and corrupt and who governed poor people.

He said, “when the economy deteriorates, we feel the pain more sharply than other Nigerians. With security, we can feed ourselves and feed the rest of Nigeria. But when cost of inputs become prohibitive, threats to lives limit productive capacities, herds are stolen or limited by hostile and damaging political interests, the economy of the North suffers.

“We recognize that restructuring the Nigerian economy involves a tremendous boost in productivity of the assets which the North is blessed with. We look forward to a restructuring process that involves our assets and our interests.

“We ask the President and our Governors to pay close attention to relieving the hardships and stresses which these critical and strategic transitions will involve. We ask to be involved as genuine partners, not as targets of policies and programmes that are designed in capitals.

“We ask that our current limitations are understood by leaders and policy makers, so that our current disadvantages are not compounded by poorly-designed policies. Our people are hardworking and we have no desire to depend on any section of the country beyond what is made necessary by the logic of an inter-dependent economy”.

On governors frequent foreign tourism he said, “we expect our Governors to be in the frontline of the search for credible policies. There are excellent blueprints and suggestions on improving the Northern economy which they can utilize. Please reduce your travels around the world. Real investors will come to you. Spend the money you spend on travels in paying salaries and pensions and expanding employment opportunities for young northerners. Out of the adversity that makes it difficult for you to pay salaries, you must discover opportunities. You asked our people in 2015 to trust you. They did. Now you should trust them.

“You should trust them to elect those they want to lead Local Government Councils, the same way you were elected. If you do not move beyond lamentations, the people will tally up the days you spend outside the country or in Abuja, or how many months they went without salaries and pensions, and how many young people graduated into crimes and drugs during your tenure”, he warned.