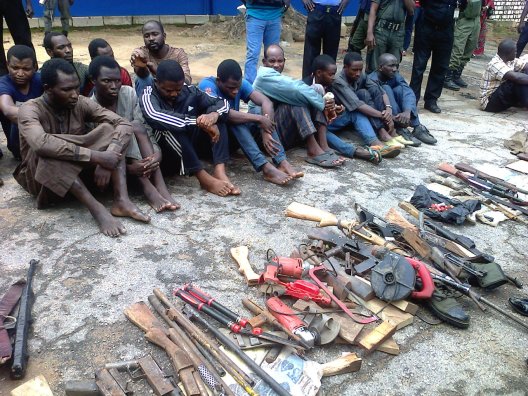 The bandits, who were arrested when the dispatched policemen attached to Sabo division raided their hideout at about 14:30 hours yesterday confessed to have been disturbing the community for some time now.

Confirming the arrest, Police Public Relations Officer in the State, DSP Zubairu Abubakar, said based on tipoff, anti crime patrol team raided the area where seven arrest was made and locally made rifle recovered.

According to him, “yes it is true. At about 1430hrs on Thursday, based on tipoff, police team attached to Sabon Tasha, raided a notorious criminals hideout  at Mararaba Rido,  arrested seven and recovered fire arm from them.

“They are helping in our investigation and will soon charge them to court. They confessed to series of armed robbery within kaduna and its environs,” he stated.

In a related development, one Bilya Abubakar, a Kano State indigene, was arrested by Turin Wada  Police station with a Honda civic, red colour with registration number HJA 837 AA.

The suspect was arrested while trying to dispose the vehicle in the area.

He appeal to people in the State to furnish the police with genuine information that can lead to arrest of criminal elements living among them.