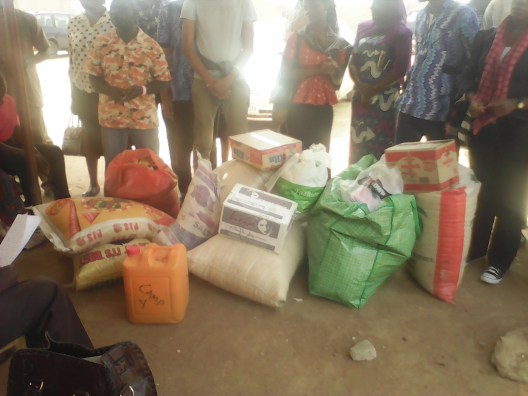 In the spirit of yuletide, a Kaduna-based non government organization, Oma Life Rescue Foundation (OLF) is set to put smile on the faces of about 350 less privilege with foodstuffs, clothing and cash gifts in Kaduna on Tuesday 20th December 2016.

Chief Executive Officer/ President of the Foundation, Dr Mrs‎ Omanibe Ani disclosed this while speaking with newsmen at the weekend at her Kaduna office ahead the event tomorrow.

According to her, “Tomorrow the 20th December, 2016 at Dutse village opposite NYSC orientation camp, Abuja express and from10 am, our Foundation will be given not less than 350 persons gift items to include rice, wrappers, yams, Maggi, salt, Indomie noddles and some cash among other gifts  to make their Christmas and new year celebration memorable”

Those expected to benefit will include widows, orphans and the less privilege in the society as a way of remembering them in this festive period, she disclosed.

She said, the foundation stands for the voice of the masses, reaching out to patriots, philanthropists, generous spirited individuals, organizations and government bodies that see and feel the plight of the less privilege in our society so as to embark on a joint task force rescue mission.

“The foundations aim is to see to the well being and growth of humanity with ‎basic focus on poverty alleviation, child care and emergency relief/aid. We are also committed to make dreams a reality and put smiles on the faces of fellow human being” she said.

She further stressed that the essence the planned occasion is “reaching out, putting smiles on the faces of the less privilege at this festive period of Christmas knowing fully well that the lives we touch reflects beauty in ours” she emphasised.