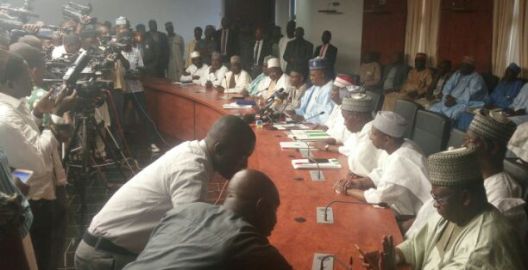 Northern youths under the auspices Arewa Youth Forum (AYF) on Wednesday rose from a meeting to issue a stark warning to  some politicians from the region to stop politicising the health status of President Muhammadu Buhari, saying if those concern fail to stop their games, they may be forced to take action against them.

They accuse the politicians of try to form a new power block in the absence of President Buhari which is detrimental to the North and Nigeria as a whole.

The statement signed by the National President of the forum, Comrade Gambo Ibrahim Gujungu said, AYF is worried about the development in the country as it concerns the polity and health of Mr President and its attendant consequences for social economic growth and development of the country.

The statement read, “after an indept look at the  prevailing circumstances, we deem it necessary to affirm that all is not well with the country and most especially the North as the region that holds the political reign of the country.

“President Muhammadu Buhari like any human being can be sick and looking at his age and the demand of supritending over a  country like Nigeria, it is not surprising that his Doctors have recommended further rest for the President to enable him recuperate towards facing the task of taking the country to the next level.

“However what is worrisome is the attitude of the politicians especially those of Northern extraction towards the health of the President.

“Information available to us shows that instead of praying for the quick recovery of Mr. President and working to put the country in a better stead ahead of his return to the country. Many of them including some northern Governors are working to position themselves for personal political gains to the detriment of the ideology of Mr. President and the reason for which he was overwhelmingly elected by majority of Nigerians.

“It is now clear that many APC politicians do not mean well for the country and only supported the President for what they stand to gain.  It is truly only the masses of this country that genuinely love and believe in the President and praying for his quick recovery.

“We are also worried and investigating information about some top northern politicians who are already collaborating and floricking with top leaders of the ruling All Progressives Congress, (APC) from the South West in a new power alignment that might not be in the interest of the North just for selfish reasons.

“If they fail to desist and work for the advancement of the north and Nigeria as a whole we might be forced to name and ridicule them and their antics before the whole country  and render them as political liabilities”.