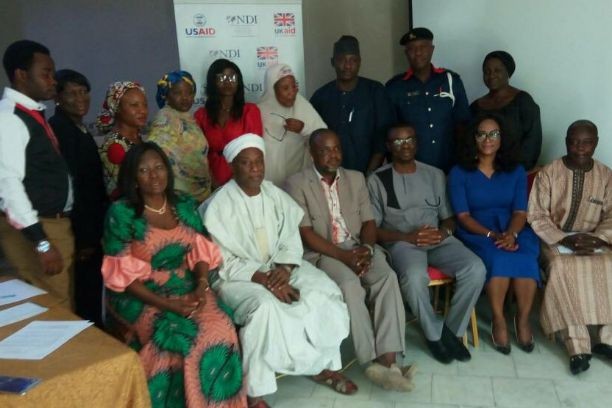 VAPP Act, developed to address continuous issues of violence against person in Nigeria where anyone found culpable upon conviction will be punished to serve as deterrence and correction, was passed at the national level in 2015 towards the tail end of President Goodluck Jonathan. It is about reduction of violence in the state.

These groups of Nigerians are working on how to domesticate the Act as a bill to address multi-dimentional nature of violence include rape, domestic, gender imbalance among others ravaging Kaduna State in recent times.

It is against this backdrop that a non-governmental organization called GAT with the support of NDI organised a 3-day capacity building training for the advocate committee (drawn from CSOs, Media, Security, Traditional leaders) that will do the follow up to ensure it scales through legislative processes.

Member representing Kagargo Constituency and Chairman, information and Home Affairs, KSHA, Dcn Nuhu Goro Shadalafia said, the leadership of the Assembly is interested in the bill promising to sponsor the bill as private bill.

To Shadalafia, “the common man will benefit from the bill if eventually passed into law in many ways. For example, it will give everyone the sense of belonging. Citizens will know their right are protected where it was not taken care by penal code and other laws that exist in the state.

“Also, the issue of punitive measure that has to do with issue of payment of fine instead of serving jail term that will  make people think before acting against anybody in the state.

“This is not limited to only the children, it is all encompassing and that is the beauty of it. This law is existing in some states in the country and it will just be a good thing if this law come to existence in Kaduna State.

“Our present at this meeting showed that, the Assembly is interested in the law particularly having the backing of the office of leadership of the Assembly.

“The bill is coming as a private bill by the grace of God. I intend to drive and see to its logical conclusions. Once we commence plenary sittings, people will hear the first reading, the second reading and maybe the passage of the bill. We will work on it before the next legislative assembly”, he promised.

Executive Director, Gender Awareness Trust (GAT), Dr. Lydia Umar said, her organisation was committed to this course as a result of too much violence in the state and Nigeria in general.

“What we are planning is to domesticate it here in Kaduna, one that is relevant to our situation here in Kaduna for that matter. Nobody can argue against the fact that violence is a crime that requires discipline. The survivors suffer in silence. We don’t want that to continue. We want a redress to issues and that is why we are pushing for it.

“I am glad that we have found a good and very supportive hands in the State Assembly, the person of Honourable Nuhu Shadalafia. He’s willing to see that the bill scale through all the processes. He’s working closely with Barr Suleiman Balarabe who is actually the draft man in the State Assembly.

“But we must give credit to NDI who is supporting us to see through this bill. We have grey areas on about 26 national law before arriving here. For example, somebody that is raped, no fine can be paid to undo what you’ve done. It is more about correction to make sure the society is sensitised.

Earlier, Deputy Country Director, NDI, Raymond Esebagbon said, his institute was working to provide support and strengthen CSOs to advocate for the right of marginalised communities which include women and people living with disabilities (PLWD) in order for them to participate in political process.

“So, part of what we are doing here in Kaduna is to support policies and programmes that will create more space for women to participate in politics, elections and so on.

“Some of the activities we have done include but not limited to ‘Stop Violence Against Women in Election’.

“But in the course of doing those activities, we discovered that there are different forms of violence against women, against PLWD and people generally. We felt that since there is response policy at the national level through the passage of national VAPP Act, it should be stepped down in Kaduna to reduce the wave of domestic violence”, he explained.