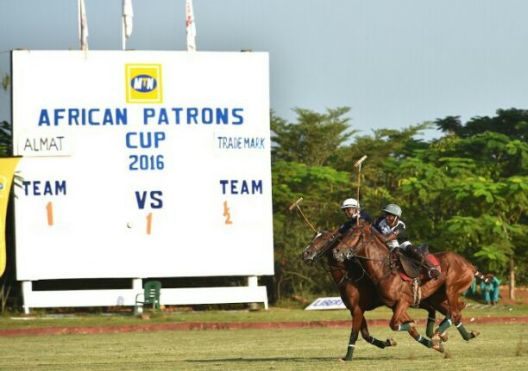 2016 MTN African Patrons Cup Polo Tournament 2016 galloped off Monday, October 17, with emphatic display by two Abuja based teams who eased through their opening games in the General Hassan Cup.

The second match of the day very much followed the pattern of the opening game, as Almat, boasting team patron, Maurice Ekpenyong, Ibarhim Musa, Abdulmalik Badamasi and their talisman, Idris  Badamasi made good their pre-tournament rating in edging local rivals Abuja Trade Mark 6-21/2 to finish joint leaders with Manarat and set stage for a close combat in the race for the General Hassan Cup.

Despite a late rally by the Trademark quartet of Nasir Lucat, Aliyu Umar, Abu Ibrahim and Lado Aliyu’s to retrieve their faded prospect in the crowded general Hassan Cup, Idris Badamsi dispatched them with two quick goals to ensure victory to Almat.

For his pivotal role in Almat victory, Idris who accounted for most of their goals, was voted the MVP, and got a handsome cash reward from Katsina United Football club Chairman, Alhaji Aminu Kurfi.