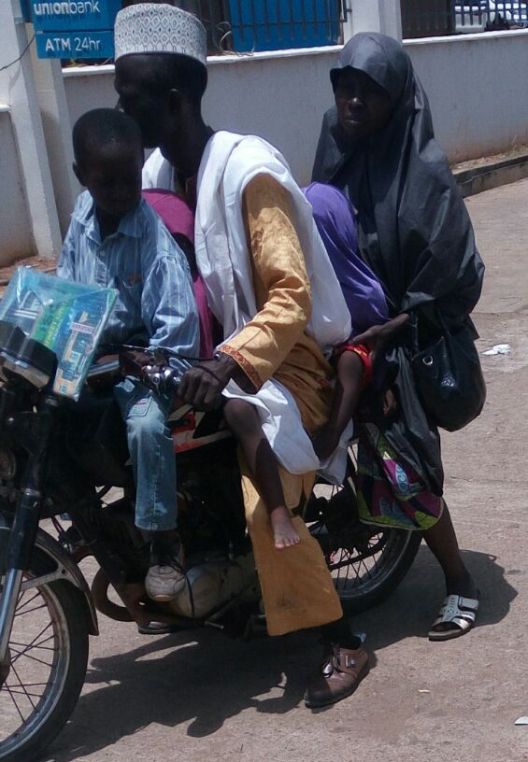 (A man and his family travelling along WAFF road, Kaduna sometime ago)

As people of three local government areas of Kaduna State could not celebrate Christmas and other important festivities freely this year due to curfew imposed in the zone by the state government, Moro’a youths in Kaura local government have blamed the Southern Kaduna People’s Union (SOKAPU) for the development.

The youths are angry that the development has led to the  postponement of the 50th anniversary celebration of its paramount ruler, Mallam Tagwai Sambo earlier scheduled to take place on Saturday.

But in a swift reaction to the allegation, SOKAPU’s National President, Dr Solomon Musa via a telephone described the allegations as strange saying, the Union was not in the first place aware of any protest staged in Kafanchan let alone participated in it.

The leader of 67 ethnic groups that make up SOKAPU said, the Union was not against any peaceful protest and had never excluded any Southern Kaduna community from its activities, but such allegations which were baseless was only the handiwork of mischief makers, urging those behind it to come out in the public to make their grievances clear.

The Sunday Sun however reliably gathered that the 50th anniversary and the 80th birthday of the Paramount ruler of Moro’a chiefdom, Mallam Tagawi Sambo scheduled to hold on Saturday 24th December had been postponed following imposition of a twenty four hour curfew in Jema’a, Zangon Kataf and Kaura local government areas.

He lamented that the poor leadership provided by SOKAPU has caused the Moro’a community to feel relegated to the background.

“The Union did not organize any protest in 2014 where hundreds of lives and property worth millions of naira were lost in similar attacks in Moro’a chiefdom but was quick to organize a demonstration on the crisis in Godogodo. This selective treatment does not give the Moro’a community a sense of belonging,” he said.

However, SOKAPU clarified that, the members of Moro’a community held key positions in the Union including its National Auditor, Legal Advisor and Assistant Treasurer, adding, “we have so much respect for the Chief of Moro’a”.

“The Deputy Governor hold a high position in the State and as such, he could not have been part of other meetings like consultative or tribal meetings”, he surmised.