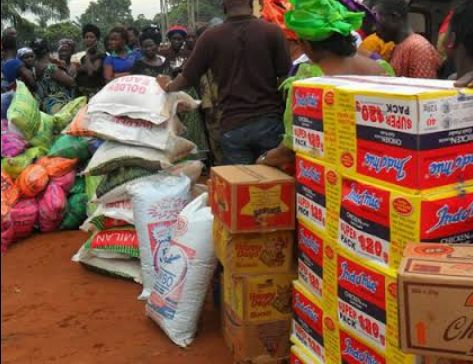 The lawmaker, who is the present Minority Whip and got re-elected on the 23rd February Presidential and National Assembly election condemned the unwarranted reoccurring killings in the area and called on government and well meaning individuals to come to the aid of people who are now rendered homeless.

Represented by Matthew Augustine who told the beneficiaries that, the lawmaker, would have been around in person but lost a very close friend Sunday morning, condoled the victims and prayed God never to see such attack again while urging them not to contemplate any form of reprisal but to trust God for vengeance on their behalf.

Receiving the items onbehalf of the victims, the District Head of Kufena, His Highness Titus Dauda under whose domain the attacked village falls, commended the member for his magnanimity in remembering his subject in their moment of pains.

He expressed the appreciation of his chiefdom onbehalf of the victims and prayed God to bless the honourable for his kind gesture.