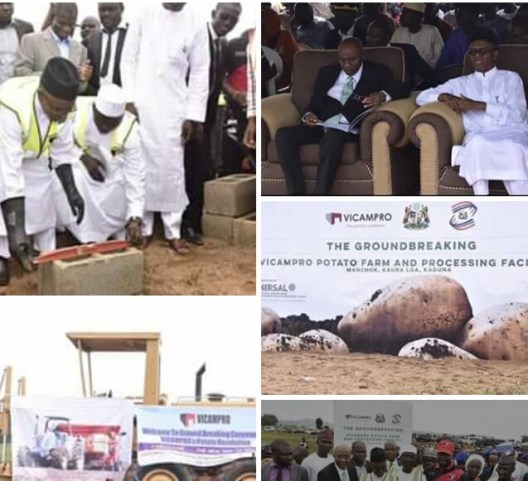 The project which is the adjudged biggest potato plant in sub Sahara Africa and its farm is expected to cover 10,000 hectares of land and generates 30,000 job opportunities for the teaming unemployed youths.

Performing the ceremony, El-Rufai said, to open Kaduna to business and investment world, the state worked with the State House of Assembly to pass a law that established the Kaduna State Investment Promotion Agency (KADIPA) as an agency that coordinates activities towards attracting and promoting investment in the state.

The governor noted that, the project is not only going to supply the local demand; as 60 per cent of the French fries to be processed will be for markets outside the country.

According to El-Rufai, “We want businesses to feel safe bringing their investments to Kaduna state. That is why we organised the Kaduna Economic Summit (KADInvest) between 6th and 7th April, 2016, to showcase the numerous opportunities and potentials of the state and how ready Kaduna is for investment”

“Today Kaduna is becoming a much easier place to do business and our efforts have already started yielding positive results. We have Olam of Singapore investing $150 Million to build the largest integrated Poultry and Feed Mill in Nigeria. Similarly, Dangote Group is investing in a 7000-hectare tomato farm and a processing plant in Kaduna state”.

He added that, “Through this Public-Private-Partnership, thousands of direct and indirect jobs will be created to reduce the high rate of unemployment and roll back poverty. We need investments across our state, to create wealth and jobs and conclusively defeat the poverty that has blighted too many lives and inclined many to succumb to machinations of division, hate and mischief,” he said.

El-Rufai also appealed to the host community to support and cooperate with Vicampro to pave way for the attainment of its mission.

Also speaking at the event, Governor of the Central Bank of Nigeria (CBN), Mr. Godwin Emefiele lamented the drop in oil prices, which he said had drastically affected the Country’s economy.

According to CBN Governor, “There is therefore need for diversification as the only alternative. What Kaduna State is doing today is what we want at this moment”

Emefiele assured the people that the bank would collaborate with the State government to translate the idea of economic diversification to reality for the benefit of all.

On her part, the Minister of State, Trade and Investment, Mrs. Aisha Abubakar described the development as a giant stride towards moving the economy forward.

Earlier in his address, the Managing Director of Vicampro company, Michael Agbogbo, said the company would produce French fries, Irish flakes and biscuits for local and international consumption.