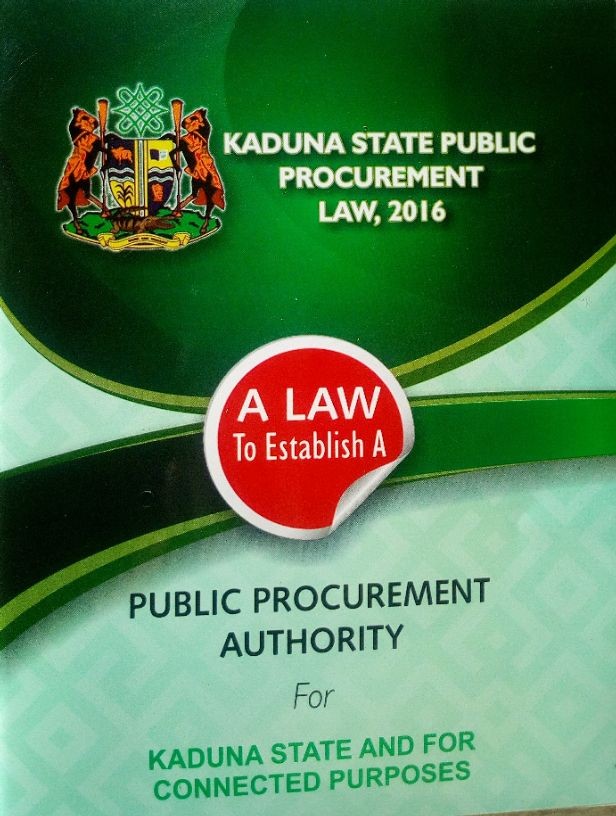 It is no longer news that corruption is eating deep the fabric of Nigeria across its economy with highest percentage taking place in government contracting processes. This development has of course, caused the country not to be where it ought to be as giant of Africa and most populous black nation in the world.

Before now, successive governments had tried to address this cancer worm with little or no genuine achievements recorded. In fact, some went as far as establishing anti corruption agencies and Public Procurement Act (PPA) to deal with the menace but eventually turned to political weapons to fight or suppress perceived enemies.

Now, in other to make contracting processes more transparent in Kaduna state, the state government under the administration of Governor Nasir El-Rufai with the help of the state assembly has painstakingly domesticated the Nigerian PPA and come up with a procurement law that provide punitive measures for offenders once convicted. This law known as Kaduna State Public Procurement Law (KADPPL) 2016, procurement experts believed will check corruption in Kaduna state especially as regard procurement.

The Public Procurement Law (PPL) of Kaduna State was enacted in 2016 as a framework of law that governs how government contracts would be executed in the state. It sets procedure for conducting award processes.

It will have impact on common man because it provides for fair competition which will lead to value for money. For example, if we have strong companies coming to bid for contract advertised by Kaduna State government, there is opportunity to get the best among them. With this, there will be more money in government covers.

Punishment upon conviction, for example, non-public officer will be sent to prison not less than a year with option of N500,000 fine. Public officer will bag five years imprisonment without option of fine and summary dismissal. Also, any legal person (company) will be debarmed (blacklisted) for not less than 10 years and a fine not more than the full value of the procurement while every director of the company is liable to a term of improvement of not less than two years or a fine of N2 million.

It is against this background that a 3-day sensitization workshop on the better understanding of the contents of the KADPPL by Kaduna State key ministries, departments and agencies (MDAs) and service delivery partners was organized at a hotel in Kano, Kano State North West Nigeria recently ahead the full enforcement of the law.

During that workshop, an expert in procurement and Law lecturer who championed discussions, Kinsley Tochi Ude strongly believed that, the state will stand tall in checking public corruption if the law is adhered to.

According to him, apart from building the confidence of contractors in the state government’s projects, it would also afford the public the opportunity to know what project has been awarded in their community and the contractor handling it thereby given room for monitoring.

He noted that, if the law is followed, public services that will be provided would be of high quality at competitive price and save cost unlike when there was no such law when anything goes quickly added that, that would make more money available for the state government to execute more people oriented projects.

On transparency he said, “PLL of Kaduna State has already made provision for how procurement should be done. It provides for open competitive bidding as default procurement. This in the sense that, procurement opportunity and intended government project will first be advertised.

“So, anyone with capacity and interest can submit bid. Now, bids will be submitted in sealed envelopes and tampered-proof boxes that cannot be accessed until the day of bid opening which will be done in public glance.

“At the bid opening, bid submitted will be brought out, each of them will be announced with details of the bidder. All the representatives will witness and follow as announced. Criteria must have been given in the advertisement because others have the right to know how the winner emerge and where not satisfied, he they can write to accounting officer.

“But if not addressed within a reasonable time, 21 working days, it can be taking to Kaduna State high court. This will serve as deterrent to anybody that will want to go contrary to the rules. So with that mechanisms already in place, you cannot bring your brother who did not participate in the bidding or revealed others’ bid document to him because everybody submitted sealed envelope inside tampered-proof box”, he narrated.

Pioneer Director General, Kaduna State Public Procurement Authority (KADPPA), Thomas Gyang said, Effect of the PPL with the office was that, it has provided a wider spectrum of areas of coverage and framework that would enable the performance of responsibilities without undue influence from outside.

Represented at the event by his Technical Assistant on Procurement, Barde Danjuma, the DG said, the PPA has two documents it has been operating almost simultaneously from the inception of the law.

“We have been operating edicts that established the Bureau of Budget Implementation and Price Intelligence. And that gave us a foothold to be able to capitalise on the law that now came and authority that is invested by the law on the public procurement”, he said.

Earlier in an address, Chairman, House Committee on Due Process and SDGs, Kaduna State House of Assembly, Markus Zarmai Yari said, the training was essential especially to the assembly that has work hard to come up with a law to make government effective.

“We supported the law and that was why we worked very hard to domesticate it. All the MDAs are expected to have a public procurement unit because we want transparency. We need to get ourselves and public acquainted to the new law. We need to know how to explain it to the public how to make public procurement.

“Like I said, we at the KSHA have painstakingly took the bull by the horns to make this law. We understand the fact that we will not be there forever but our state will be there. So, even if the law is already passed, it is not rigid that is, any necessary adjustments can still be taken”, he said.

Kaduna State Team Leader, DFID Partnership to Engage, Reform and Lean (PERL), the organizer of the workshop, Abel Adejor noted that, the law has since taken effect in the state with many transitions already implemented.

“To achieve a smooth and full implementation of the law, the KADPPA with support from the DFID Partnership to Engage Reform and Learn (PERL) organised this training for procurement officers at MDAs and other partners in service delivery”, he said.