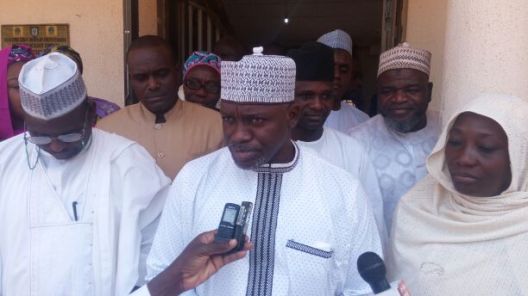 (ASUP Chairman in Kad poly, Dr Aliyu Ibrahim and other members of the union shortly after a press briefing in Kaduna recently)

The declaration, which was contained in a resolution of its State congress meeting held over the weekend  and signed by its Chairman, Dr. Aliyu H Ibrahim said, the level of impunity, corruption and direct stealing of public funds in Kaduna polytechnic is alarming.

The union therefore stated that, it will not call off the strike until the 5months arrears of peculiar academic and hazard allowance are paid.

ASUP also demanded that, the former Rector of the Polytechnic, Dr. Mohammed Bello Ibrahim and Bursar, Malam Sani Sahabi Bodinga who according to the union persistently collaborate to siphon tax payers money out of the covers of Kaduna Polytechnic, be brought to book to serve as deterrent.

The resolution statement read in part, “the situation in Kaduna Polytechnic is dire and the time to act is now. The level of impunity, corruption and direct stealing of public funds in Kaduna polytechnic is alarming and ASUP (a pressure group) which is usually shortchanged alongside the student whose finances were diverted for personal use instead of infrastructure and educational development of our dear institution would remain the voice of the people.

“The congress has directed that indefinite strike should commence until the 5months arrears of peculiar academic and hazard allowance has been paid, hence all the cabals in the bursary, registry and rectory MUST be identified and punished especially the former Rector and Bursar who persistently collaborate to siphon tax payers money out of the covers of Kaduna polytechnic.

“We therefore, call on the federal government to take a decisive action before the situation becomes uncontrollable. Very soon the wintry of despondency that has held us captive in Kaduna polytechnic MUST give way to new cal statics of freedom where sweat would be product of pleasure not toil.

“We urge us all that we stand on this epocal fulcrum of history with faith. We shall not allow the chill of cynicism, corruption and stealing of public fund extinguish the flame of our optimism for a better Kaduna polytechnic”.