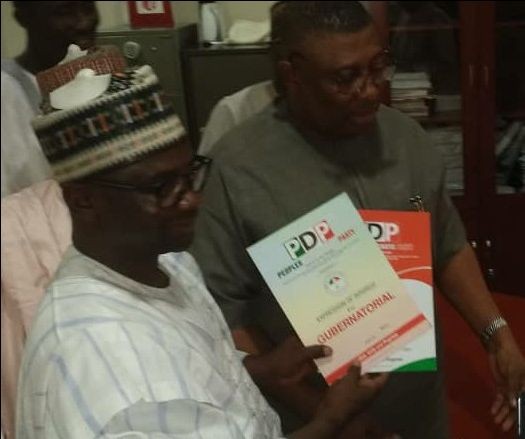 A leading gubernatorial aspirant under the Peoples Democratic Party (PDP) in Kaduna State and a former Director General of the National Emergency Management Agency (NEMA), Mohammed Sani Sidi, has submitted his nomination form to the national headquarters of the party in Abuja.

While addressing supporters and party members shortly after submitting the form, Sidi reiterated his commitment to run a decent campaign devoid of hate and urged other aspirants to do the same.

“I pledge to run a fair and robust campaign devoid of hate, character assassination or any act that will heat-up the polity. I expect such from all my co-aspirants as well. It is my firm belief that we need to, as aspirants, work hand-in-hand for the progress of our dear Party and well-being of our State”; Sidi said.

Sidi declared to support any candidate that emerge in the forthcoming party primaries in case he did not emerge as the flagbearer of the party.

He said “in as much as I expect to emerge winner at our Party’s Gubernatorial Primary Election; I shall accept the outcome of the Primaries if it turns out contrary to my expectation, and render my support to whosoever emerges winner for the common good of our Party and the people of Kaduna State”.

Sani Sidi was accompanied by the Chairman of the Sani Sidi Campaign Organisation and a former Commissioner of information, Alhaji Rabiu Bako, a former member of the National Assembly, Hon Jonathan Asake, a former State Secretary of the party in Kaduna State, Alhaji Kabiru Ballah, the State Women Leader of the party, Mrs Comfort Amwe among several other party stalwarts and supporters.