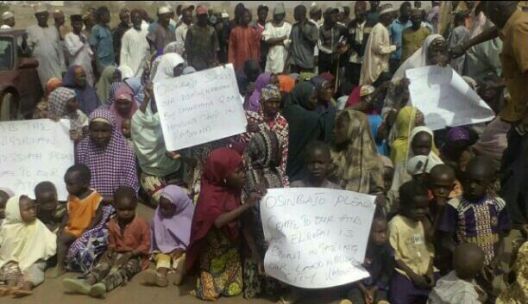 Following the alleged forceful taking over of land at popular Millennium City Kaduna by Governor Nasir El-Rufai  and subsequent protests by land owners in the area on Monday as reported in Gobroadsheet, the state government has reacted saying, nobody will be allowed to embarrass the government with polical motivated protest and go scot free.

The state government then assured land owners in Millennium City that government will not forcefully take over their land, even as it warned that they should not allow themselves to be used.

Addressing a group of selected journalists on Tuesday in Kaduna while reacting to Monday’s protests by land owners over revocation of their land at the Millennium City, the Director General, Kaduna Geographic Information Service (KADGIS), Malam Ibrahim Husaini said many of the land owners acquired the lands illegally as government has gazzeted that nobody should buy or sell land in the area.“The protest by some land owners in Millennium City around Danhonu II, Danbushiya, Kadaore, Gidan Daji villages over land taken over by government and allocated for mass housing to people without compensating them is uncalled for. They claimed that government forcefully collected their lands and were developing without compensation.“Government is not contesting that they have the land but government would not take it over without paying compensation. Government may not pay direct compensation but will replace the land either within Millennium City or somewhere else.”“In 1994, government discovered that Kaduna metropolis was congested and identified eastern sector as planning area, 12,000 hectares of land from Rigachikun to Kakau, with directive that nobody should develop any piece of land in the area. The gazette override any land title in the area but the traditional owners of the land are allowed to continue farming their land.“We had engagement with the people, we have assessed over 400 hectares of land, we identified them, we have list of the people, we are compiling the comprehensive list to submit to the Governor for approval.“The Governor has agreed to address the people on Wednesday April 12, we have letter of invitation through local government chairman, Saa Gbagyi and district heads in the area to come and interact with the Governor over the land to resolve any grievances.”“From what has happened there is political motive, for over one year, the mass housing estate is being built up, finished and painted without any form of protest, why is it now that they are protesting when more than 50 houses are being completed. Why embarrassing government now when we have invited people to come and witness what we are doing. Nobody would be allowed to embarrass government and go shot free”, El-Rufai’s land manager said.