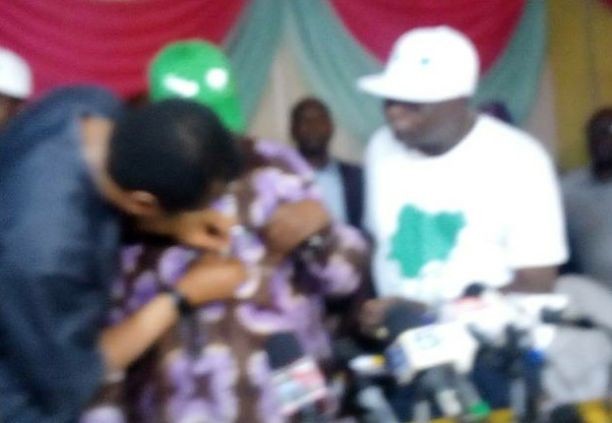 As part of the continuation of his attempt creation of what many called the third force, Former Nigeria President, Olusegun Obasanjo, on Thursday officially launched the Coalition for Nigeria Movement in Abeokuta, Ogun State capital.
RECALL that the movement was earlier launched in Abuja on Wednesday though without the presence of the former president as a person.

The retired but not tired elderstateman, who arrived the Iwe Irohin NUJ Press Centre, Oke Ilewo, Abeokuta, accompanied by the former governors of Cross River and Osun states, Donald Duke and Olagunsoye Oyinlola, respectively, Gboyega Nasiru Isiaka, Mrs. Modupe Adelaja and top politicians from the All Progressives Congress and Peoples Democratic Party, was afterward decorated with official emblem of the Movement by Duke.

Addressing the gathering who filled the hall to its caoacity, Obasanjo said, his letter to Buhari last week, was not born out of frivolity, but out of great concern for the situation in the country.

He added that Nigeria as a nation, cannot continue as business as usual, noting “if the instrument we have used since independence has not worked, then, we should rethink and retool to make the country work”.

According to him, Nigeria, like any other nations in the world, has various challenges, emphasized the Coalition was to mobilize Nigerians for peace, unity, security, stability, love, welfare and wellbeing of vulnerable Nigerians particularly the youth and women, who he believed to have been at the receiving end.

He cited disrespect for the federal character as enshrined in the country’s constitution, spate of killings and violence in Nigeria and the parlous nature of Nigeria’s economy under President Buhari’s administration, as some of the reasons for the Coalitio.