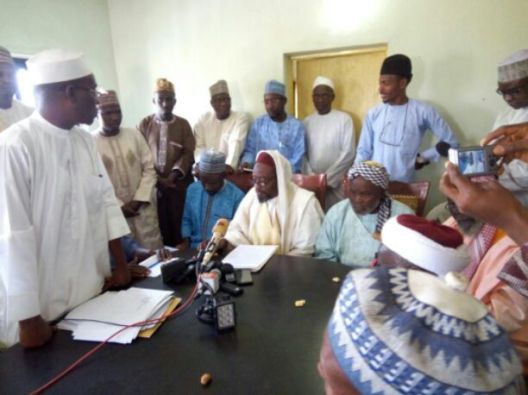 Council of Imams and Ulama, Kaduna State on Monday rose from a press conference to call on the concerned security agencies to as matter of urgency arrest President of Christian Association of Nigeria (CAN), Dr Samson Olasupo Ayokunle, Senator representing Southern Kaduna Senatorial Zone, Danjuma La’ah and several others for their alleged inciting statements on alleged armed Fulani herders attacks in southern Kaduna.

The Council’s chairman who was flanked by other members in attendance unanimously noted that, ”in the last one year or so, Kaduna State has not been in peace resulting from the activities of some mischief makers and the reckless utterances of southern Kaduna political and religious leaders.

“The Council of Imams and Ulama is most disturbed with recent events in the southern part of the state particularly the recent demonstration organized by persons who don’t want peace in Kafanchan which led to merciless killings and destruction of property worth millions of Naira.

“To actualize their sentimental zeal by way of making insinuative statements that could destabilize the state, several news report credited to southern Kaduna political and religious leaders urging their people to take arms to defend themselves and nothing was done to prevent its occurrence until the worse happened.

“While the victims are still mourning the death, nursing the wound and counting their losses, and in spite of the efforts by all relevant stakeholders to restore peace in the troubled areas, one trouble maker Dr. John Danfulani featured in an interview with an online medium where he was quoted saying “the only solution to southern Kaduna crisis is bearing of arms by everybody”.

“In the same vain, 17 Christian militias  were recently arrested by the Police Joint Tactical Operation Squad attached to the operation harmony. The suspects were found with large catchment of AK-47s, local guns, ammunitions and #400,000 in cash and two others were also arrested in Kagoma by the Army”, he said.

He further said, “failure of previous governments to punish the perpetrators of past crises led to all sebsequent crises in the state. For example, the Justice Okadigbo’s tribunal of 1992 on Zango Kataf crises found General Zamani Lekwot (Rtd) and five others guilty and sentenced them to death which was not executed.

“The white paper of the Judicial Commission of Inquiry into Kaduna State Religious disturbances of 2001 recommended for further investigation and reprimand of Elder Saidu Dogo, Archbishop PY Jatau and Archbishop BA Achgili.

“The whitepaper on the FG investigation pannele under the leadership of Sheikh Lemu on the 2011 post election violence and civil disturbances recommended among others for the police to investigate an History teacher that slaughtered the father of his students in her presence.

“These few cases and others drew the attention of the council to call on the government to arrest and prosecute persons who made inflammatory statements that instigated the crises”.