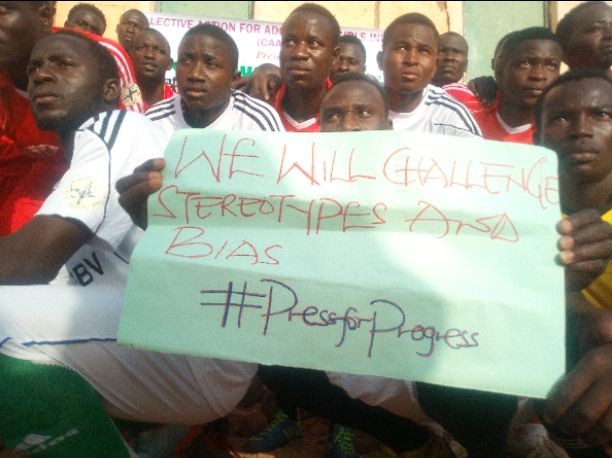 The football match was proudly supported by Christian Aid under its Collective Action for Adolescent Girls Initiative (CAAGI) project in Kaduna aiming at encouraging men to support women in education, empowerment among others.

These Boys from the two neighbouring communities are members of Gender Empowerment and Development Organising Resources (GEADOR), advocating for improved choices and opportunities for adolescent girls by way of challenging stereotypes as well as celebrating adolescent girls and women achievements.

Stereotypes as used in this context refer to discrimination against women such as domestic abuse, rape, beating and other preferential treatment against them as female gender.

Speaking with newsmen at LEA primary school, Rido Hausa the venue of the football match, Project Officer, Tida Leo Abbah said, the inter-communal relationship became necessary because there was the need for all hands to be on deck to support women’s progress.

According to her, the theme for this year’s women day; “Press for progress”, was apt considering the number of women and adolescent girls that have been discriminated against just because they are women.

She said her NGO believed that, it is high time the communities which make up of the larger society imbue in their young men and boys the virtue not to see women and adolescent girls as competitors but partners in progress and the need to give them the required support to reach their full potentials in life.

Also speaking, Monitoring and Evaluation Officer, Linda Sidi Umar said her organisation also involved male champions, who are playing key role in the advocacy campaign to end gende-based violence in the state while helping females to make their voice heard.

At the end of the match, Rido Hausa boys defeated their guests from Kujama with a lone go to go with the trophy.

The spectators were then trilled by entertainers from the host community as part of the highlight of the campaign.