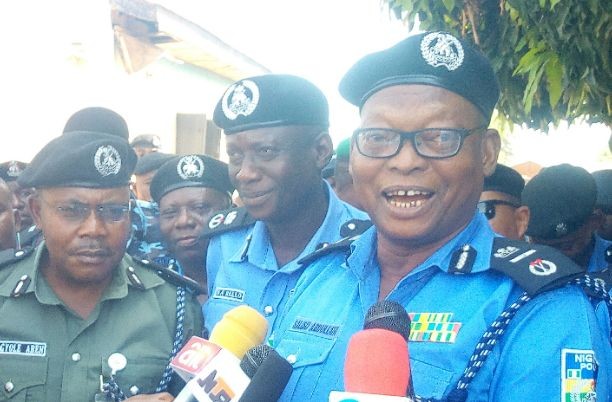 Following the recent protest by people of Sabon Gaya community, Chikun local government area of Kaduna State that led to blockage of Kaduna-Abuja highway for hours on Sunday, Inspector General of Police, Ibrahim Idris on Wednesday visited the community.

The people of Sabon Gaya community located at kilometers 16 along the ever busy Kaduna-Abuja highway had on Sunday 12th November blocked the road to protest killing of a 35-year-old member of the vigilante group, Haruna Maikaji by unidentified assailants while on his farm. The development had put thousands of motorists plying the road on that day to untold hardship for hours before they retired to their abode.

Represented by his Assistant in charge of Zone 7 (Kaduna, Niger and Federal Capital Territory), Salisu Abdullahi Fagge, during operation ‘Show of Force’, the IG warned that, police have what it takes to bring about desired justice and will not allow anybody to take laws into their hands at detriment of others.

“Nobody is allow to take laws into their hands. It is not in the best interest of anyone to block Kaduna-Abuja highway knowing its importance as linking road between the North and the South.

“Please maintain peace and talk to district police officer on ground whenever the need arises. The CP has been directed to investigate the killing and very soon, you will see what will come out of this investigation. I want to assure you once again that we have the strength to protect you.

“While we are trying to protect you, you also have a role to play to make us succeed greatly in this fight against crime. We need information and intelligent to deliver better. Tell us where they are, how they are preparing, where they lie down and will will respond immediately. We don’t want to hear such a thing again not only in this area but everywhere across the zone”, he warned.

Responding, Sir Gbagyi I, Dr. Danjuma Barde thanked the security operatives especially the police in their efforts to safeguard lives and property of his people saying, the community will help the police to succeed.

The traditional ruler, who was represented by one of his Chiefs, Alhaji Abubakar Badaru told the police boss that, the killings do not take place on the road or within the community, but most of them happen in the bush when the locals must have gone to the farm, urging the police to intensify aerial surveillance to address the trend.

“Sir, we commend the efforts of our security men especially the police. But I want to tell you that, most of the killings happen in the bush when our people go to their farms. I want to plead with IGP Idris if he can help us to monitor the area using helicopter. That will help us a great deal because the criminals do their evil work more outside the town”, he pleaded.

Operation ‘Show of Force’ saw the representative of IGP, CP Abeh and other senior police officers touring old toll gate, Sabon Gaya, Alheri prayer camp, Gadan Mallam and kidnapping centre, Rijana to show the locals that the police have got the strength in human and hardware resources.