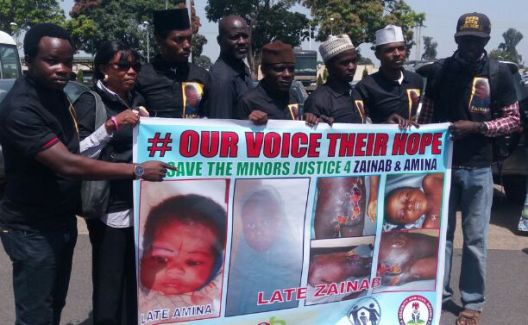 (Journalists stand with Women and Children)

Hajiya Hafsat Mohammad-Baba, Founder of a Kaduna-based non-governmental organization called Global Initiative for Women and Children (GIWAC) is known for her advocacy on domestication of women and Child Right Act (CRA) in Kaduna State. She recently took the campaign to Governor Nasir El-Rufai soliciting his support on quick passage of the CRA by the KDSHA and also to seek justice for Zainab who was torture to death by her caregiver and 7-month old baby Amina, who was fed with concentrated poison (locally known as ‘otapiapia), by her stepmother. She spoke with SHOLA OLU. EXCERPTS: 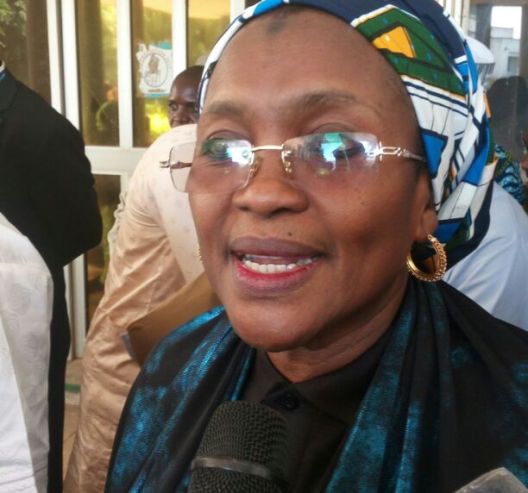 With your experience in the act of giving voice to the voiceless, how will you describe the rate of violence against women and children in Nigeria in 2016?

2016 was a year characterized with blessings and challenges depending o which side it showed to you. We at GIWAC had tough cases during that year. Unfortunately the crime is going higher because we hear all sort of stories usually against women and children. So many people are talking about it but not doing anything about it.

In Kaduna here, the rate is getting higher most especially when we look at child right in terms of raping, violence and trafficking. We have high rate of maternal mortality and divorce at the same time, women been maltreated while in some cases, they are been stopped from having custody of their children.

We also get complaints of step mothers whether they kill the step child or harming the child by broken one part of the body or the other. This is resulting from broken homes; children are been left unattended or they are been left with father or relatives who don’t have quality time for them. So, we are not happy about it at all.

The reports reaching us from IDPs where our young girls and women are been sexually abused and assaulted because of small food is equally very pathetic and worrisome. We have all these problems and we have all the statistics in our hands.

Apart from aforementioned, are there other lapses to be addressed as regarding who does what to create more awareness and possible justice for victim or survival of domestic violence?

Yes, we have also discovered that some parents have failed to provide for their children and the children are now the ones providing for them. These young girls who suppose to be in classrooms or under the armpit of their parents are in motor parks, markets and streets hawking. This expose them to a lot of evil. In some cases, children are even sent outside the state to go and do house maid or nanny. Eventually you will find out that members of the new family violate these children. So I felt there are women experts who go to the villages and brought these children in large number to town and started distributing them which is wrong.

Even the children of elites are not safe because they have drivers, gatemen, dry cleaners and all that. So, we have to look at this menace of violence against women and children holistically.

What are you doing then to correct these identified points you have just raised, is it something you think your organization alone can shoulder successfully?

You see, children cases are special cases and they need special handling even at judicial level. The thing is that, we have this child right act which some states have domesticated. Now, Kaduna State want to follow suit. It has been lying there for a long time. But with the rising cases against children, the government of Nasir El-Rufai see that it is necessary to support this child right act because if you look at it, it is going to give direction on how to handle children cases for others to learn.

Even though some people are trying to being religion and traditional sentiments into it, what the government did was to get all these people together with some lawyers to look at it holistically to arrive at what can be acceptable by our people. So it was reviewed and I’m happy to say it now before state assembly. It has passed through first reading and I prayed it will scale through second and third and eventually passed. We are doing it to support the government because the government cannot be everywhere and we will continue to support the state government, state assembly and judiciary.

The governor has showed interest st and has promised he will ensure it is passed into law. And if he does, his name will be written in gold in Kaduna state. It is a collective responsibility for all of us to see that this document is passed into law.

Are you making progress?

There was a case where a step mother poisoned her step son and she was granted bail by Police despite knowing that the offence is genocide. So when we intervened, the case was referred and the lady was rearrested to come and face the law. We will continue to follow cases against these children whether they are alive or not.

To move speedily, we also seek the support of Police. Sometimes we find it difficult dealing with Police, I must be frank with you. Because the justice the women and children are suppose to be getting, they are not getting it. Sometimes money exchange hands. It may be be sometimes power which is not suppose to be. Police should be friends to all. There must be justice in the land for everybody so there can be lesser crime and criminals.

What prompted you into business of lending voice to the voiceless with particular reference to women and children?

First, I’m interested in it because I am a mother. I have children and now have grand children. Their safety is very key and important in the society. No sane society will want their younger ones molested. I mingle with those in the communities and in the course of interacting with them, I found out that some of them have genuine cases but they don’t know how to go and apply justice. They need people like us to give them voice. Everyone is entitled to live and you cannot take and go scot free because you are not the one that gives it. That is why we are spending our time and resources to support the government to have a safer society.

What is your most worrisome experience since your involvement in the organization?

The most worrisome situation is one case that I’m handling now where a 7-year-old girl was tortured to death by her caregiver. When I saw her dead body, I shed tears. I put myself into that situation and I was like, if she were to be my daughter, how would I feel. God knew  what she went through before she died. That was why I determined that, whatever it will take, even if that girl is not alive today, I will stand for her to ensure justice is being done.

And when I was making my presentation to the governor and his deputy, Bala Bantex, they shed tears too. The deputy asked whether we are war zone. Had it be that I know before that girl died, I would have take her in my custody. We would have probably save her. Even neighbours knew that girl was suffering, she was been beaten but they were not talking until she died. I really felt very bad. Her death has given me more courage to sensitize and enlighten our communities to start talking when they see things like that happening.

One of the way we do that is that, I keep advising people not to give out their children no matter how bad the situation around them. They should not give them to caregivers but hold them closely because they are gift from God in our care as parents. If you know you cannot take care of the child, please don’t bring that child into the world.

What about best moment, any?

Laugh….The happiest moment is when I see justice  been done. Like I told you earlier, the example of the lady that killed her step son. The pitiable thing is that the husband divorced her on the ground that he has forgiven the the other lady that poisoned his son. I’m happy that the perpetrator is brought back to detention, meaning the girl who was killed and her mother will get justice and that gives me happiness.

How are you coping with all these without affecting your position as a wife and as a mother, how do you unwind?

Yes I do relax. I have support of my husband. My children are grown up and they are supportive. My friends and media are making me to pressing on. I receive phone call at odd hours. But it is my happiness to help people even if it means that will be my own way of unwinding as you asked.

I cannot solve all their problem, but the little I can do with support of others like you to bring smile into faces of people, I will strive to do just that. So, like I said, my children are grown and any time I’m free, I relax at home with them at weekend.

What other things will you want to add?

I appreciate support I enjoy from governor. The support we are getting from him is that he listens and take action if there is problem and we relay such problem to him. That quick intervention from him actually encourages us and also give hope for our children in the state.