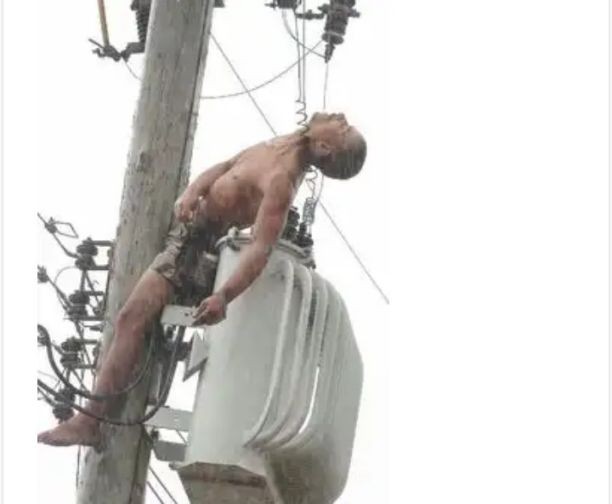 Tragedy struck at Alagbaka Area of Akure in Ondo state at the weekend as a staff of the Benin Electricity Distribution Company (BEDC), Mr. Daisi Isaac Aregbesola was electrocuted and died instantly.

The saddenning incident which occurred around 5pm attracted the attention of some passerby mostly motorists who tried in vain to save the life of Aregbesola whose body was dangling inbetween the high tension cables.

The BEDC worker who had resumed for work as early as possible was said to have been instructed by his boss to rectify a fault on an electric pole in the front of the Zenith bank at Alagbaka in Akure before he met his untimely death.

Mr. Aregbesola known as ‘sapee’ until his death served as an electrical engineer and a contract staff member with the BEDC branch office, Alagbaka and was age 38.

One of the sympathisers who witnessed the incident told journalists on Sunday that he was attracted to the scene as a results of the loud screaming of some passerby.

The sympathiser who also preferred to be anonymous explained that the BEDC worker received a shock from the high tension wire while performing his duty.

His words, “I had barely walked pass the electricity worker when I heard a very loud noise and saw him dangling on the pole.

“It was an unfortunate scene to behold as people rushed down to the ladder to bring the man down from the pole as his body was hung between the wires.

“In fact, it took the BEDC almost an hour to arrive at the scene after the man had died and his body already brought down from the pole by sympathisers”.

While describing what led to the death of the BEDC worker, a source in the company said the victim was working on the fee-der due to some faults detected on the high tension wires that had occasioned the power outage in the area.

Funke Adeniyi, the estrange wife of the deceased also confirmed the incident in a phone chat with journalists in Akure.

Mrs. Adeniyi said that her husband was immediately rushed to the Ondo State Specialists Hospital Akure but was confirmed dead on arrival by doctors.

“A younger brother to my husband called me that he (Daisi) had an accident and I should meet them at the state hospital.

“I was confused and had to rushed down but when I got to the hospital, I was told he had a shock on the high tension lines at the front of Zenith Bank and he died.

“Workers in his office told us that, a boss sent him a message to work on the high tension cables due to some fault on the poles at the Alagbaka area in Akure.

“I asked them that why did they switched ON the light (electricity) when they knew that my husband was working around the pole. So, I am smelling conspiracy”.

She also added that her husband was employed about four years ago and had cognate experience on the job before his unfortunate death.