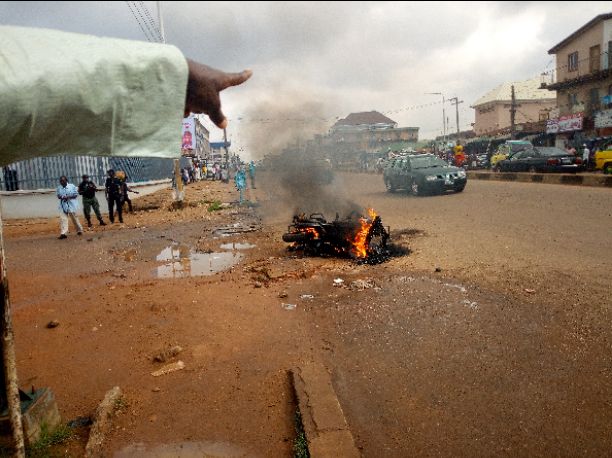 In Kaduna on Wednesday morning, two patrol marshals of Kaduna State Traffic Law Enforcement Agency (KASTLEA) escaped been lynched by angry mob over the allegations that they were responsible for a tricycle accident at popular Katsina roundabout.

But their power bike could not escape as suspected angry mob quickly set it ablaze without remorse and fled the scene before the arrival of armed security men.

Eyewitnesses accounts alleged that, the KASTLEA men were the ones pursuing the tricycle which led to the accident.

But on a contrary, Assistant General Manager, Provost, Benson Bivan who rushed to the scene said, his men were only trying to rescue the accident victims when miscreants mistaking them for causal agents.

Benson vowed to get to the root of the matter and fish out the perpetrators of what he described as unfair treatment melted to people who are on their constitutional assignment.

The two injured occupants of the tricycle have been rushed to the hospital while one of the marshals could not been found by his superior neither his mobile line available as at the time of filing this report.

This is not the first time angered residents in Kaduna would be attacking this state security outfit for varying reasons bothering on road and environmental issues.