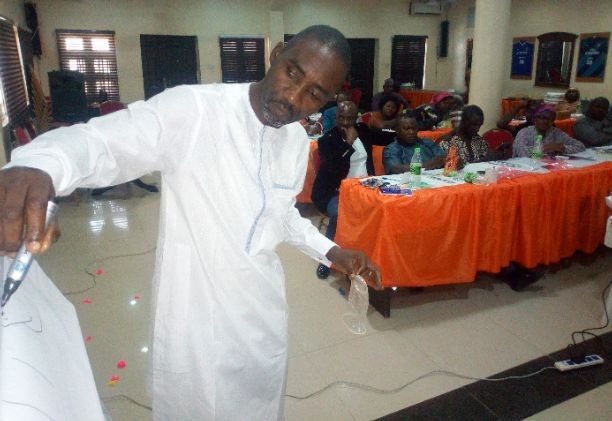 (Acting UNICEF Field Officer, Dr. Idris Baba demonstrating female condom before the participants at the meeting in Zaria on Wednesday – Pix by Editor)

Available information shows that, high percentage of these young persons are not even aware of their status which is a serious concern to stakeholders including UNICEF.

It is against this background that, UNICEF and media practitioners in Kaduna State, Northwest Nigeria on Wednesday renewed their partnrship with a view to reaching these group of persons, sensitise and encourage them to go for HIV test in order to know their status especially in the year 2018.

The organization is targeting online, print, electronic and social media to reach out to these group of persons, parents, guardians, government and other development partners to address the worrisome trend.

In recent reports, HIV prevalence is declining among adults, but on the increase among adolescents due to various determinants including unprotected sex.

Dr. Idris Baba, during the meeting in Zaria on Wednesday said, HIV in adolescents in Nigeria remains a big concern as findings from focused seven local government areas of Kaduna state revealed.

He then added that, UNICEF has scaled up support to tackle high HIV prevalence among adolescents in the seven local government areas of Kaduna State which include Igabi, Lere, Jema’a, Chikun, Kagarko, Birni Gwari and Jaba.

According to him, only seven percent of the adolescents surveyed at the beginning of the intervention programme in March were tested and received their HIV result, hoping that, 90 percent is expected to be tested and placed on antiretroviral drugs by the year 2030.

The official disclosed that UNICEF had budgeted about N200 million to run the adolescent and young persons (AYP) programme in these selected LGAs.

The objective according to UNICEF was to raise AYP access to HIV testing from 20 to 40 percent by the end of the intervention programme in May 2018, and increase condom usage among adolescents from 30 to 50 percent in the seven local areas.