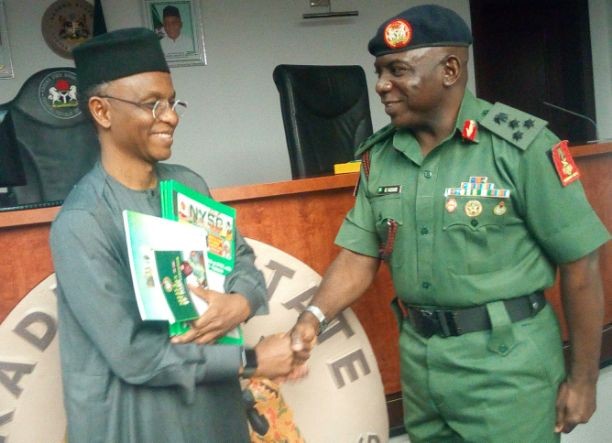 (L-R: kaduna State Gov, Nasir El-Rufai handshaking the DG of NYSC, Brig-Gen Suleiman Kazaure when the DG paid him a courtesy visit before the 2017 batch ‘B’ pre-orientation workshop in Kaduna on Wednesday)

El-Rufai made the call when the leadership of NYSC led by its Director General, Brigadier-General Suleiman Kazaure paid him a courtesy visit shortly before the opening of a 3-day 2017 batch ‘B’ pre-orientation workshop in Kaduna, Northwest Nigeria.

He said the scheme should be properly funded to strengthen Nigeria’s unity in diversity, “so whatever the NYSC scheme needs to be successful for the corps members to be well taken care of, for them to go where ever they want to be or needed in Nigeria, I think we should fund it.

“From what I hear many young people now don’t like going to states other than where they are comfortable. They think places where they have never been are hostile communities and they don’t want to go.  But I will like to use this medium to appeals to our young people to be adventurous.

“NYSC will make you go to places you have never been because that is how you know more about Nigeria. This is what I will like to see the NYSC do more of instead of fixing postings and all that. Just allow the computer to post people based on where they have gone to school.

“Post them to where they have never been. That’s the only way we can bring Nigeria together so that young Nigerians understand that our problems as a country are the same all over. Some more seriously than others, but the challenges are the same. That inculcated in me, a Nigerianness that did not exist and I think is an experience everyone should have.

The governor however thanked the NYSC for the choice of Kaduna for the National workshop, hoping it would boost the economy of the State while it last quickly added that, the development was an indication that the security situation in the state has improved greatly.

In an address, Big-Gen Kazaure said, the choice of Kaduna State to host the event was in appreciation of the support and hospitality the scheme enjoys from the state government and the good people of the state.

He then promised that, his leadership will continue to build on the solid foundation of the scheme and come up with initiatives that will promote the scheme and helping in achieving its national integration mandate as largest youth mobilization organization in Nigeria.

The 21-day orientation course is one of the four cardinal points of NYSC where new sets of Corps members will be expose to the nitty-gritty of the scheme before being posted to their places of primary assignment for the one year mandatory services to the motherland.