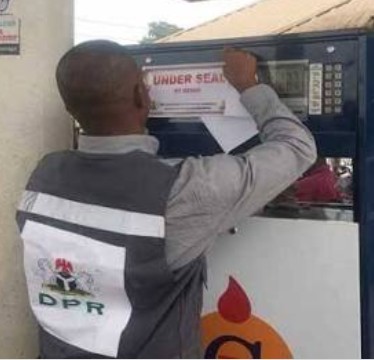 In response to information received from patriotic Nigerians regarding sales of Petroleum Motor Spirit ( PMS) above the regulated pump price of N145/litre in Zaria town and some remote locations around Zaria, the Department of Petroleum Resources (DPR) said it has suspended undisclosed number of erring filling stations in Zaria.

According to the Spokesman of DPR, Rabiu Bello in a statement issued in Kaduna on Friday, some Petrol stations were caught red handed in Zaria and surrounding areas selling at N190/litre, and they were instantly put under seal.

He said, the Zonal Operations Controller, Alhaji Isah Tafida led the team, accompanied by Civil Defence operatives to the sealed stations in Zaria and Hunkuyi, where he directed a reversal to the Government approved price of N145 litre, and monitored sales.

“As penalty, the companies were charge N100,000 per pump to be paid directly into government TSA account.

The stations were also suspended from lifting products for three (6) Months.

“Alhaji Tafida warned all marketers who engage in sharp practices to desist or face stiffer sanctions, including withdrawal of their operating licences.

He emphasized that government procured the product and it was sold to marketers at a price that guaranteed them reasonable profit margin.

He further warned that marketers should not assume that being far from Kaduna conferred any advantage on them to hike prices as they wished, and that DPR would not relent in its surveillance activities to ensure that products allocated to filling stations were delivered and sold to public at the approved rate per litre.

The Zonal Operations Controller appealed to the public to contact DPR through the telephone numbers provided on DPR website: www.dpr.gov.ng if they observed any malpractices at any Petrol fling Station. Sending details of the station, its location and the offence committed through text messages, he emphasized, was most preferable.