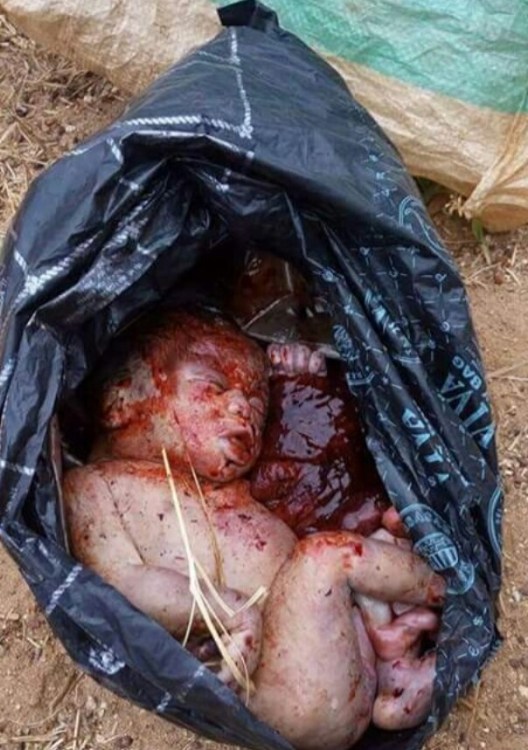 A non-governmental organization, Nigerian Urban Reproductive Health Initiative (NURHI) has raised an alarm over increasing cases of dumping of new live-births by unknown women in Kaduna State, saying there is a need for concerted efforts by stakeholders and general public to nip the menace in the bud.

Though the menace is not that new across the country, but it has been on the increase in recent times with little or no attention paid to it by both the key stakeholders and the society itself. While some married couples are spending fortunes to have their biological babies, other individuals (who are most likely not in marriage relationship), due to several reasons, are dumping theirs in deadly spots like refuse sites, gutter, and motor parks to attract public sympathy for the innocent baby.

For instance, just recently, a fresh-born-baby was found on a plane ground close to a new generation bank, off Racecourse road, Murtala Square, Kaduna North local government area of Kaduna state at the mercy of local breed dogs and pigs before it was rescued by passersby and handed over to Kaduna State Police Command for possible medical attention.

Of course this is one of several unreported cases in Nigerian densely populated cities and towns where it is difficult trace the perpetrators.

Kaduna State Leader of NURHI, Kabir Abdullahi, told Saturday Sun that though the organization is currently working in some selected states of the federation in its one year intervention with key achievement in Kaduna which he said other states in Northern Nigeria must emulate to reduce their maternal mortality rate.

He cited an instance, where a woman immediately after giving birth took the baby and dumped it at the doorstep of a traditional leader and walked away. Unknown to the traditional father, she met and exchanged pleasantry with the woman on his way back home. So when got to know of the baby, he remembered and gathered boys who ran after the woman and brought her back. The reason she gave was that she could not take care of the child because she is not married and beside, as a traditional leader, he should be able to take care of the baby.

According to him, baby dumping is one of the outcomes of lack of knowledge or oughtright rejection of right information about Family Planning (FP) contraceptives services due to several factors including tradition and religion, saying it very rampant today. “There is virtually no district head that you go to that will not share his personal experience with you. It is big concern to them because most of the cases end up at their doorstep”.

On whether the FP has any link with issue of baby dumping he said, “basically, the relationship between baby dumping and contraceptives is clear. A woman dumps a child because she doesn’t want it. So in other word, an unwanted pregnancy leads to unwanted baby and the unwanted baby is the baby that is dumped anyhow.

“NURHI’s concern is, rather than having unwanted pregnancy and unwanted baby, why not use contraceptives to avoid unwanted pregnancy. This is a menace associated with communities of unmarried people but who could not wait until marriage before having sex. So it is necessary for ladies in this category to visit any public hospital to access the contraceptive that suit them. It is free.

“We are reviewing our work for the first one year of in Kaduna. We are set for phase 2 paramount objectives to scale up our intervention that has proven to be effective. We are moving into new geography. We are moving into additional eight local governments in addition to seven we had in one year making it 15. The focus is how to expand access to contraceptives for more women.

“If you look at statistics from the North, Kaduna State is standing alone with 20.1% contraceptives prevalent rate (CPR) while other states like Kebbi, Zamfara, Kano, Katsina, Sokoto having maximum of 1%. It means these states need to learn from Kaduna State to save their women from maternal mortality rate. In Kaduna, we are targeting 47% CPR by 2018 as contributory to 36% national blueprint target for Nigeria by 2018. If the state is able to achieve this, it will change the agony surrounding mortality tendencies because it will reduce death associated with pregnancy by 40%”, he said.

District Head of Doka, Kaduna Central, Alhaji Bala Muhammed Tijani said, he was always delighted each time the issue of child dumping was raised because of his experience, noting that he has not ab initio though for a moment that there would be a link between the concept of child-birth spacing until he was part of NURHI’s project in the state which has revealed some of the social problems in the society today, quickly added that it was when he understand the linkage and relationship between the issue of child-birth spacing, contraceptives demand and availability vis-à-vis the issue of child dumping , “I began to see the picture clearer”.

He continued, “It is true that we at the traditional institution have been bearing the burden more than any other person of institution. I do experience this virtually every two months and in some cases the frequency is even higher. I can tell you now that I have six children that my village head are taking care of whom we don’t know who their biological parents are. And these six children are being taking care of with my assistance in terms of their upbringing and these are the kind of problems we undergo day after day because we have been trained on how to handle these kinds of things as part of our duty.

“It is a real big problem and I think we need a concerted effort not only from local government but state, federal and even international organizations to come in. things are changing very fast now in this country. We don’t have the system we used to have before anymore. The country is being built without social system been put in place for the needy. I am a District Head without a kobo as a vote to be able to implement any programme or policy or carry out any public function, but yet, I do find a traditional way of getting things done the right way. Honestly the pressure is becoming unbearable now due to high demand.

“Like I said, child-birth spacing is a very good concept. There is nothing wrong with it afterall because it is simply telling you that you are human and not a machine and of course if you are not a machine, you cannot continue to produce simultaneously in such a pragmatic fashion. It’s telling you that your body, your system needs rest. I as a Muslim, I cannot find anything wrong with it. In fact, my Imams and Islamic scholars are telling me that it is Islamic. So child-birth spacing is acceptable to me and anybody within my field.

Reverend Isaac Gbadero from Zaria Interfaith noted, that issue of child dumping “has been with us though not been publicize as it ought to because the society seem not care about it and may be, because of our tradition.

I think it is time to talk about it. It is as a result of failure of parents at home. That is the way I see it. Failure from home on the basis that if a child get pregnant and she’s threatened, she will find a way of disposing that baby after birth. If parents are educating their children right from home on how to prevent themselves from even having sex before marriage, this will not be happening because most of the women who indulge in this dastard act are not in marriage.

“My Holy Bible tells me in 1stCorinthians Chapter 7:1-4 that if you cannot hold your body, get married. But unfortunately people don’t read their Bible to live what it says.

“This has much to do with FP and or child-birth spacing on the basis that if people are generally educated on it, all these ladies who go out recklessly and get themselves impregnated, if they know about these contraceptives, it will at least prevent some of these things. Though it is not ideal to sleep around outside marriage but it will be saver instead of carrying the pregnancy for 9 months and then dump it anyhow and allow the innocent baby to suffer your misdeed”.

However, Kaduna State Government through the Director of Social Welfare and Child Development, Ministry of Women and Social Development, Ibrahim Dabo, hinted that such cases are hardly reported to the ministry, saying the only one the ministry is aware of in recent time happened in 2015 and the baby involved later died.