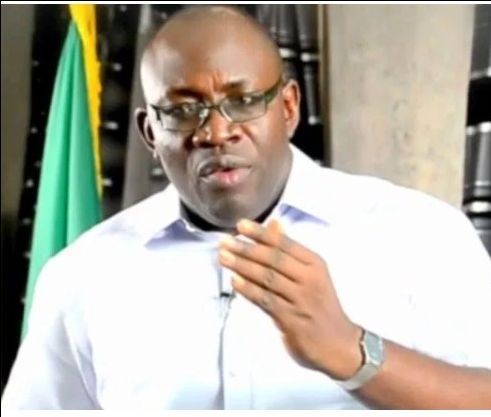 The Bayelsa Commissioner for Special Projects, Fred Obua, on Tuesday slumped and was rushed out of the venue of the ongoing inter-ministerial briefing to mark six years of Governor Seriake Dickson in office.

Mr. Obua, who was due to make presentation suddenly slumped and was rushed out of the Cultural Centre, Yenagoa, venue of the event and taken to an undisclosed private clinic.

NAN reports that the Master of Ceremony (MC), Tari Oweifawari, who earlier announced that Mr. Obua would make presentation at the event, later informed the gathering that the commissioner was “indisposed.’’

“The commissioner, who was also supposed to make his presentation is having health challenges and that won’t permit him to present his score card,’’ Ms. Oweifawari said.

The state Commissioner for Information and Orientation, Daniel Iworiso-Markson told journalists that Obua could not wait due to his health challenge.

“What do you want me to say, the man was rushed out because he has health challenge; he cannot wait for the presentation.

“He was to make his presentation, but due to his health, he was rushed out,’’ he said.

Only the Commissioner for Community Development and Chieftaincy Affairs, Frank Ibegi briefed newsmen, out of the two ministries lined up to make presentations.

Mr. Ibegi in his presentation said the present administration had performed well in terms of rural-urban development.

He said establishing health centres in the rural communities was a milestone in the history of the state, adding that the focus for 2018 was to ensure peace and infrastructure development in the communities.