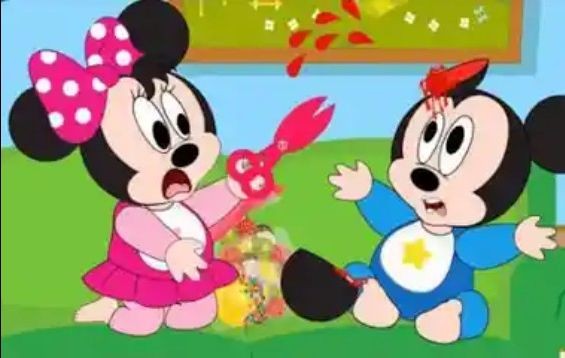 video production company in China has had its operations suspended and been forced to apologise after distributing children’s cartoons featuring Peppa Pig and other well-loved characters in violent and disturbing scenarios.

Guangzhou Yinjun Trading Company said it had neglected to think about the harm to children when it was chasing web traffic by producing alarming replicas of popular cartoons.

The cartoons, which showed crude renderings of popular children’s characters in violent or sexually suggestive situations, had been uploaded to online children’s entertainment channels and shared via social media.

One of such video showed Princess Elsa from Disney’s Frozen having her head cut open for a tooth to be removed, while another saw Mini Mouse sever Mikey’s ear with scissors.

On Wednesday,  the National Office Against Pornographic and Illegal Publications suspended operations at the two offices of the Guangzhou Yinjun Trading Company after it was found to have been sharing links to the videos via its Happy Disney account on Weibo, a Chinese social media.

The company has since apologised for the “horrible videos”, admitting: “When we were making videos, our team had one motivation in mind – increasing traffic – but we neglected to think about the harm and influence these videos, featuring horror, could bring to young children. We feel very guilty about the harm these videos could do, and we hereby express our deep apology to children and their parents.”

The Guangzhou Yinjun Trading Company is one of the first firms to suffer the consequences of government action, spurned by Chinese parents who took to social media to warn others about the distressing content they’d discovered.

The move follows a crackdown by YouTube, which is banned in China, on similar content worldwide last year. The company castigated in China has no known links to the YouTube clips, although the content appears similar.

China’s obscenity watchdog earlier in the week ordered all major video platforms to remove and check for content aimed at children that depicts terror, pornography, brutality or violence.

The country’s main online media companies, including Tencent Video, Youku, Sohu and iQiyi, have all released statements promising to remove offending videos and block the accounts that upload them.

The YouTube content is thought to have slipped past the Google platform’s algorithm thanks to the uploaders’ clever use of keywords.

YouTube promised to look into the security issues but ultimately called on parents to report inappropriate content.