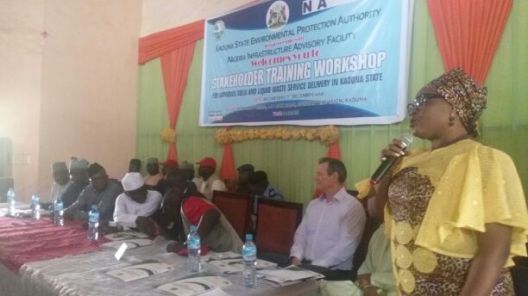 British Government through its Nigerian Infrastructure Advisory Facility (NIAF) project is partnering Kaduna State government to develop sustainable plans to manage high volume of waste generated in the state without having adverse effect on the environment.

Michael Cowing, who led NIAF team to the stakeholders training workshop for improved solid and liquid waste service delivery in Kaduna on Wednesday said, his country focus on the cities in Nigeria and see how to make them effective cities in terms of solid waste management, transportation among others which Kaduna is not an exception.

He said, “we have begin to see significant breakthrough though the long one. Looking at where we are going to be in the next five years as a state and as a country. We are bringing our expertise to see how we can jointly have a sustainable solid waste management. I look forward to your contribution during the workshop”.

Declaring the workshop open, Governor Nasir El-Rufai, who was represented by his Deputy, Architect Barnabas Bala  Bantex said, the move became necessary in view of rising population and the need to put solid and liquid waste to productive uses.

According to him, based on population projection, Nigeria would be the worlds’ 3rd most populated country by the year 2050. Specifically, the country’s population is projected to grow from its current estimated 183,523,000 to about 273,120,000 in 2030, surpassing United States of America by mid century in 2050.

El-Rufai said the Federal Government has made substantial progress in defining institutional roles and developing supporting policies for sanitation services in rural and urban areas.

“The key challenge for the country is to promulgate this policy guidance at the state level as sanitation management is mostly the responsibility of states and local governments”.

“The country has made limited or no progressn attaining the MDGs sanitation target, with over 30 percent or about 60 million of the total population lacking access to adequate sanitation facilities.

“This failure is attributed to the inability of state governments to roll out and implement global and national instruments at the sub-national levels in specific areas of sector policies and strategies. That is why we in Kaduna State under the current administration will always welcome any strategic effort that can augment what we are doing to have a greater Kaduna we all yearn for.

“You should all see this workshop as a unique opportunity for rethinking the urban agenda in which our state and local governments can respond by promoting a new model of urban development.

“A model that incorporates municipal solid and liquid waste regimes with other facets of sustainable development to promote equity, welfare and shared prosperity”.

In a remark, State Commissioner for Environment and Natural Resources, Shehu Balarabe Giwa said, the workshop was part of plans by the state government to exploit opportunities in waste management, adding that his ministry had accorded priority to waste management and would open up and develop the liquid waste management valve chain and transform it into an opportunity for citizens of the state.

According to him, solid waste management regime currently employs over 6,000 youths in the state, with thousands engaged in recycling opportunities.