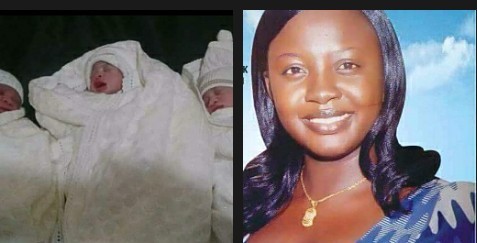 (The late Janet George and the triplets she left behind)

Pregnancy is a time of excitement but sometimes, it is also a time when common concern can become worrisome. Under normal circumstance, the news of new birth is the one that merries the heart of not only the immediate family but others who are priviledgedto hear such news. But when unexpected like death of the mother or the newborn or both occurred, the earlier narrative of good tidings turn sorrow, sadness, uncertainty and gnashing of teeth by those who hear it. That means death of a mother is a big disaster for the family. There is also possibility that when a woman dies around childbirth, the survival of the newborn cannot be guaranteed.

814 out of every 100,000 women go to labour room dont come out alive due to complications around childbirth. But why would a woman died while giving live? This is one question that has been bordering the mind of experts in maternal, newborn and child health (MNCH) within and outside the country. Nigeria, thought 7th most populous country in the world is ranked the first in maternal, newborn and child deaths rate with highest of this rate rests in northern Nigeria, according to a report by Health Reform Organization of Nigeria (HRON).

It is against this background that, Saturday Sun X-rayed maternal health in Kaduna and spoke with women and their relatives who had at one time or the other experienced the sad tale but are alive to tell their own story while others were not that fortunate especially as it happened at secondary facilities owned and managed by Kaduna State government.

Investigations showed some of remote cause of poor maternal indices include but may not limited to high poverty level, large out-of-pocket expenditures, low female literacy level, cultural/ gender barrier, weak health system and poor attitude of health workers among others.

A relative, Asha’a Priscilla Daniel lamented that, a friend turned in-law lost her life around childbirth on the 19th December 2017 in manner no member of the family understands, ”nobody knows what happened in the theatre. We were told it was due to fibroids complications. She was diagnosed of fibroids but can’t they remove the fibroids alongside the babies”? she asked.

Generally, fibroids are nit that dangerous in themselves however, the size and loation are te issue. Fibroids are non-cancerous masses of compacted muscles and fibrous tissue, found inside or outside their uterine wall. 70-80 percent women have fibroids which can be removed before or after pregnancy in order to reduce miscarriage, Reproductive and Women’s health Specialist, Doctor Andrew Orr recommended.

Asha’a said,, “if there is anything I wish for the year, is for Janet to come back to life and take care of her three beautiful girls she gave live. The children are with one of our aunts in Kaduna. It was a very sad experience that a woman who undergone antenatal care in the same facility can passed on just like that. The husband, her three-year-old girl, other immediate family members and friends are still in shock as we speak.

“But we really don’t know what happened to her like I said and that is our concern at least it is important to know that so others can learn from it, I mean if it is not from the hospital itself because we’ve heard several cases of negligence and poor attitude of health workers to their patients”, she said.

Ordinarily, there is no any doctor that will be happy that his patient die after successful operation. Investigation however revealed that, late Janet was having fibroids before she was brought into the facility for delivery with her chances of survival put under 50/50 at such condition. But a family member said, she had her antenatal care at the same facility.

A top management staff of the hospital who does not want to be mentioned in print because such was not permitted said, ”the operation was successful and she had already left the theatre before the unfortunate incident happened and we are sad about it.

“We also need religious leaders to help us talk to their followers. When some of them come around to give birth and there is the need for them to go under knife, many of them will tell you no because their pastor has told them that they will not put to bed through operation even when their faith is no as strong as that of their pastors.

“So, in that situation what can a doctor do. But when the situation get worst they will come back and be pleading. But because doctors were trained to save lives, they will still want to go ahead which in some occasions, lead to unfortunate record of mother or her foetus dies around birth. I never said this is what happened in her own case but I’m only sharing our experience with you to help the public in your report”.

According to this source, “the management of the facility was doing a lot, going beyond normal employment terms of service to save more lives. For example, the management has on extra mile to provide light at critical units like maternity due to irregular power supply and cost of running on generating set especially at night. We also put on generating set once it is 11 am to run our laboratory equipment.

The source further denied the possibility of  the medical doctors who are staff at the facility of working elsewhere saying, such was not condoned by the hospital’s management.

“The public too should not just pass judgement on any facility or doctor base on narrative they may have heard without getting adequate information about the real issue. I am happy that her family was not economical with truth. She was actually a friend of the hospital and her death was painful to us. The hospital is currently understaffed though, but that has not stopped all of us from working towards improved service delivery. I have slept in my office on several occasions just to make sure things work out well. I have been to every unit today to ensure we are on course”, the source said.