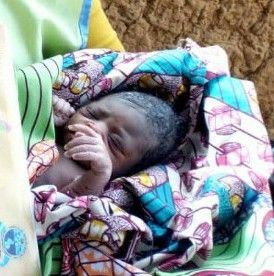 The Population Reference Bureau (PRB) recently released its 2018 World Population Data Sheet, providing its latest population data. The report estimates that the 2018 worldwide total fertility rate (average births per woman over their lifetime) is 2.4, a figure that has been declining for the past few decades.

The three countries with the highest total fertility rates are Niger (7.2), Chad (6.4), and the Democratic Republic of the Congo (6.3), while the lowest are in South Korea (1.1), Singapore (1.2) and Taiwan (1.2). Marcus recently discussed the disappearing South Korean baby. This Nigerian engineer also has something interesting to say about high fertility rates.

According to the projections used, Africa’s population will more than double by 2050, reaching 2.6 billion people and accounting for 58% of the global population increase by that date. The population of Asia is projected to rise by 717 million, reaching 5.3 billion people.

A total of 38 countries will have smaller populations in 2050 than in 2018. China will register the largest numerical population decrease―about 50 million―followed by Japan at 25 million and Russia at 9.4 million. Romania will see the largest percentage decline in population (23 percent).

This means that many countries must continue to address the medical and long-term care needs of an elderly population while also investing in the well-being of and future opportunities for younger generations and dealing with a declining workforce. An aging population influences a country’s economy in a number of ways. Japan is one of the world’s oldest societies, and 36% of the population is projected to be age 65 or older by 2050, compared with 28% in 2018.

Conversely, countries with high fertility and child dependency are challenged to fully develop and utilise their young people’s human capital, making the most of their ‘demographic dividend’ and decreasing poverty. Africa falls into this category. We may also see increased migration from these countries to prop up the declining workforce’s of other countries; a hot topic at the moment for many.