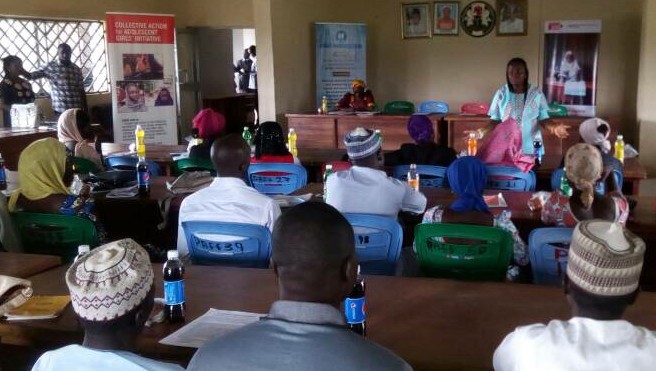 Christian Aid Nigeria through Collective Action For Adolescent Girls Initiative (CAAGI) project in Kaduna has tasked religion leaders to intensify advocacy for issues that concern adolescent girls in the state.

Assistant Project Officer, CAAGI, Miss Tida Leo on Monday during a one-day sensitisation forum with representatives from Ramai, Zonzon and Kamuru-Ikulu communities in Zangon Kataf local government area of Kaduna State said, the project was aimed at improving the choices and opportunities of adolescent girls especially in Northern Nigeria to live productive and meaningful lives.

She added that, the influence of faith leaders who were entrusted authorities in their respective communities was germane to achieving the set objectives.

“Our religious leaders are mostly looked upon to provide spiritual guidance on all issues including affairs concerning adolescent girls and as such, people listen to them very well hence their involvement in this campaign.

CAAGI focused on the need for Faith Actors as key influencers to inform adolescent girls on related issues including, education, early marriage and economic empowerment.

“The issues cut across both religion and as such, the need to engage religious leaders is necessary to attain the set objectives”, she said.

A Clergy, Pastor Reuben Abaje from Kamuru-Ikulu community said, as religious leaders, they have not relented in the advocacy of adolescent girls saying, there had been drastic sensitisation on early marriage and drug addiction amongst adolescent boys which was largely responsible for unwanted pregnancy in the community.

Representatives of CAAGI initiatives from communities in Southern Kaduna recounted some of the successes recorded in their respective areas.

Godiya Kato from Ramai Zonkwa said her community especially adolescent girls have benefited as some of the girls who dropped out of school have had a rethink and now back in school.

Also, Queen Adamu from Zonzon community said there had been a significant increases in the number of adolescent girls who wished to pursue education while others indicated interest in small and medium scale businesses (SMEs).

CAAGI and Voice to the People (V2P) are two projects currently running in Kaduna state and been funded by Christian Aid Nigeria.