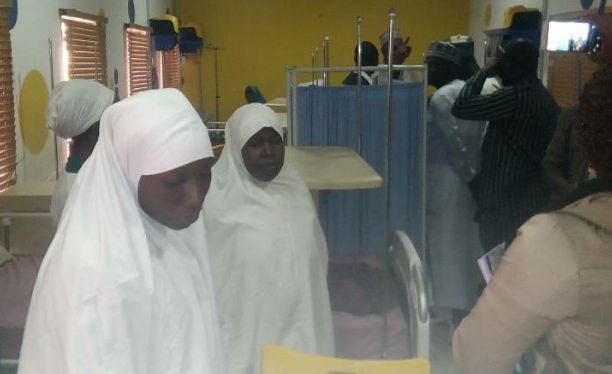 (This is the ward where the baby was stolen)

The new baby born to deaf parents which was stolen by a female suspect at Yusuf Dantsoho Memorial Hospital, Tudun Wada, Kaduna North local government area of Kaduna State, Northwest Nigeria is yet to be found 17 days after.

Police is yet to make any arrest in connection with the crime weeks after.

-Gobroadsheet reports that, a female suspect had posed as a relative of the deaf parents and even settled the hospital bill before she disappeared into the space with the baby like evil spirit-

Another fact that emerge earlier in the day was that, the female suspect, who was believed to have had her accomplices waiting in standby car after settling the medical bills, had offered the deaf father a N1,000 note to go and get some drugs for his wife at undisclosed medicine store.

But unknowing to the man, the suspect may have laced the money because the man collapsed shortly after he collected that money. So, it was in the process of trying to rescue him by emphatisers that the suspect went away with the baby – a source disclosed.

Meanwhile, further investigations by Gobroadsheet revealed that, this was not the first time the issue of missing baby would be recorded in the facility.

Analysts expressed worry why concerned authorities have not been able to intensify security around the hospital.

Close Circuit Television (CCTv) should have been installed in the facility and  others in its category to forestall the urgly trend, human right activist, Gidado Taheer said.

However, as at the time Gobroadsheet visited, there are some security men believed to have been deployed by the state government on ground to guide against break down of law and order following a peaceful protest that occurred at the facility a day earlier.

This is a developing story. You can follow us for update.