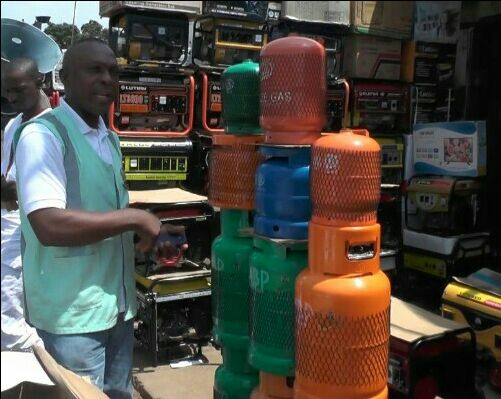 The exercise which lasted several hours, was said to be aimed at taking proactive measures against possible explosion that may result from using substandard gas cylinders.

A little hitch was encountered when Kaduna State Coordinator of SON, Danlami Emmanuel Datti led team to the Central Business District within Kaduna metropolis was  greeted with stiff opposition by some of the traders, who were bent on disrupting the raid and confiscation of sub standard cylinders spotted in their business premises.

In an interview with newsmen shortly after the raid, Datti explained that the sub standard cylinders were being seized because of the serious threat they pose to unsuspecting users in their homes or business premises.

He said that such cylinders were time bombs waiting to explode with dire consequences on lives and property of individuals and communities.

“It is a big risk to human lives. Most of them when they explode, they lead to big problems like pulling down of entire buildings, whenever a fire incident occurs and one of them unfortunately is there,” he said.

When asked what would happen to those that obstruct officials of SON from carrying out their functions by violent traders and dealers of sub standard products, he said that they would face the full weight of the law to serve as deterrent to others.

Making further clarifications, the Regional Director, SON North-West, Dauda Yakubu explained that the move on the sub standard cylinder sellers was proactive to prevent deadly incidents that could be devastating.

“Issues that border around the safety of citizens and the general public cannot be taken lightly. We cannot afford to wait until something happens before we start taking actions. Issues of Liquefied Petroleum Gas (LPG) cylinders are very serious, once it happens, it brings down the entire building, so we don’t waste time,” he emphasized.

Areas that were raided by the teams included Sabon Tasha, Central Business District, Constitution Road and Stadium Roundabout axis in the Kaduna metropolis, while several other areas were raided in Zaria, where no resistance from the traders was recorded.